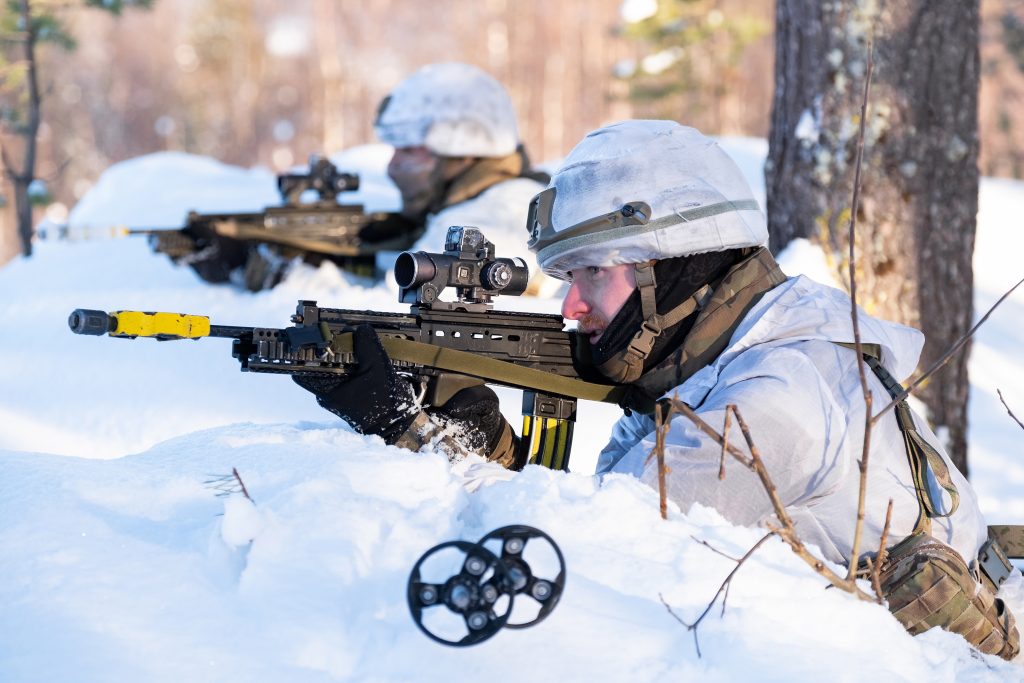 Pictured are X-Ray Company, 45 Commando Royal Marines supported by Vikings of Armoured Support Group (ASG) on the final troop attack in the Arctic during Winter Deployment 21.

The fury of battle reverberated around the snow-blanketed mountains and fjords of the high north – the climax of two months’ arduous Arctic training by Royal Marines.

Arbroath-based cold weather warfare specialists 45 Commando were tasked with ambushing and pursuing a mock enemy across the mountainous terrain, testing each marine’s guile and tactical skill in one of the most inhospitable places on earth.

The week-long ‘fight phase’ was also a chance for further development of small-team tactics that are a key part of Future Commando Force modernisation, which is seeing Royal Marines embrace new technology and return to being raiders from the sea.

Sergeant Taylor, Mountain Leader Class 1, said: “The aim of the week, and the course, is to produce marines who are comfortable with operating in a mountainous and Arctic environment, and we achieved that.

“The fight phase is deliberately arduous, as it successfully instils the discipline and skills required to overcome both the environment and a determined adversary.

“The final week of the course was a significant step-up from the mobility phase (in which commandos refresh skills in moving on snowshoes and skis), the weather became a lot more challenging as well, but the marines relished the opportunity to be tested in this environment and demonstrate that they can still be lethal.”

The commandos operated across mountains, gathering intelligence on their ‘enemy’ and disrupting and destroying positions.

They also further honed skills from earlier in the winter deployment, moving on skis and snowshoes to quickly get across the battlefield and utilising survival techniques to sustain themselves in their brutal surroundings.

New troop commanders were given the freedom and responsibility to draw-up and issue their orders and deploy their marines against 45 Commando’s recce troop, who were acting as the adversary in the battles.

At the same time, the specialist Shore Reconnaissance Team from 30 Commando Information Exploitation Group were launching missions on the side of a Norwegian fjord around the Narvik area.

The expert team from the Surveillance and Reconnaissance Squadron (SRS) have been sharpening their skills in landing on the rocky fjord shores using their small fast raiding craft to move in on ‘enemy’ positions.

The team – who are specialists in reconnaissance and studying coastlines for the best areas to land larger amphibious forces – carried out daylight missions as well as under the cover of darkness using night vision equipment.

To become members of the SRS Commandos must first be Landing Craft specialists and, once they have enough experience in role, they undertake a five-week arduous Reconnaissance Operators course, which develops covert surveillance and reconnaissance skills, and experience of operating behind enemy lines to gather intelligence.

Their task was to accurately move in to engage ‘enemy’ positions discretely without showing any light, using paddles on their small boats to come ashore silently.

The inshore raiding craft – which can carry up to six commandos (or four with full bergens) – are powered by an outboard motor but they are also fitted with paddles for silent approaches for covert tasks when an engine noise would compromise the mission, like those undertaken by the recce team. The team also practiced withdrawing from a beach under fierce contact from enemy positions and other emergency procedures.

45 Commando are now finishing their Arctic training with live firing at the ranges, further ski training and training on skidoos for reconnaissance and increased mobility across the terrain before returning to the UK.