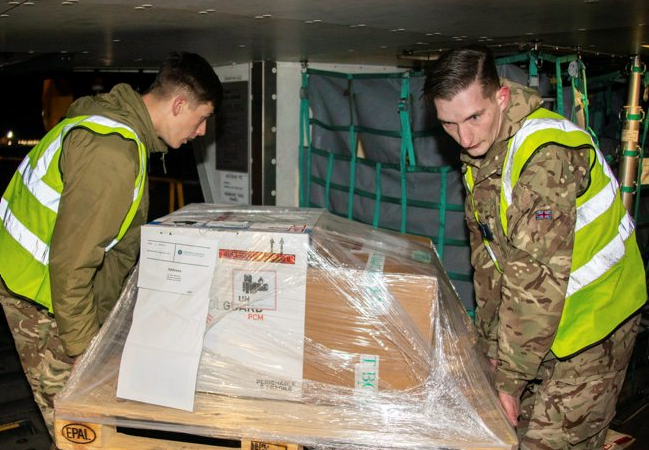 UK Armed Forces have transported coronavirus vaccines to the Overseas Territory of Tristan da Cunha – the most remote inhabited island in the world.

For the first time, the Royal Navy assisted the RAF and Strategic Command in a 6-day operation this month to the isolated South Atlantic island community.

An RAF Voyager aircraft made the 8,000 mile trip from RAF Brize Norton to the Falkland Islands, via Dakar in Senegal to refuel, before HMS Forth sailed the 2,000 mile voyage to Tristan da Cunha.

Delivered on behalf of the Foreign, Commonwealth and Development Office and Crown Agents, enough doses of the Oxford-AstraZeneca vaccine have now been delivered to the island to cover the entire adult population.

“This operation to transport vaccines to one of the most remote parts of the world, reaffirms our commitment to the people of our Overseas Territories.

The Armed Forces take great pride in supporting our people, at home or abroad, whenever and wherever needed. I am immensely proud of all Royal Navy and RAF personnel involved in this mission and the role they have played in helping to deliver vaccines to the people of Tristan da Cunha safely and quickly.”

“I am proud of the support the UK has given its Overseas Territories during a horrendous year. 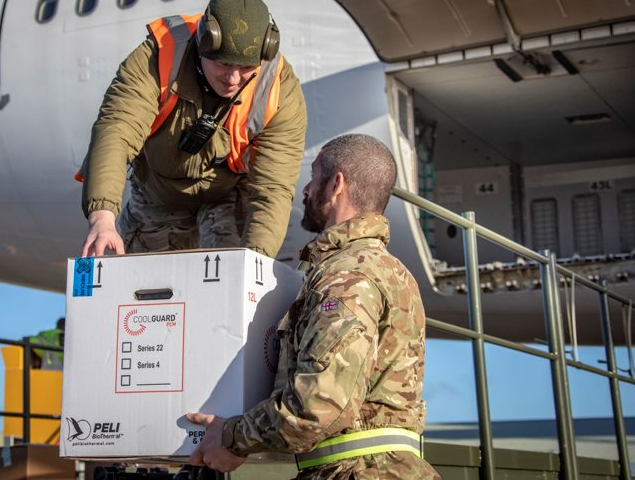 In total the Foreign, Commonwealth and Development Office has delivered over three million items of medical equipment to the Overseas Territories since March last year. They have organised delivery of lifesaving vaccines to all of the inhabited Overseas Territories. This has been no small logistical, physical or diplomatic feat and I have been incredibly impressed by the work of local administrations in rolling out our world-leading vaccination programmes.”

The remote volcanic island has fortunately had no confirmed cases of Covid-19. However, with a population of just over 200 and with its nearest neighbour over 1,500 miles away, the island would have faced a variety of challenges should Covid-19 have hit.

The delivery, which arrived on 21 April, will ensure the island’s entire adult population who wish to can be immunised against coronavirus.

“We are immensely proud to have been part of the team to have made this mission possible. Delivering Covid vaccines is a delicate matter: They have to be stored at specific temperatures throughout their journey- remote destinations are especially difficult since the vaccines travel 10000 miles by air, ship and road and are exposed to significant climatic temperature changes. The team has achieved this, and it is Crown Agents’ mission to continue to ensure that isolated communities such as TDC are not left behind in the fight against Covid-19.”

The operation was a huge logistical challenge, made more complex by the need to store and transport the vaccine at an ambient temperature so that the vaccines remained at between 2⁰C and 8⁰C throughout its transfer.

Vaccines were stored in specialised fridges on board HMS Forth, with the temperature checked regularly by the crew. They were then moved from ship-to-shore inside a temperature controlled container, before being safely stored in the fridges at Tristan da Cunha hospital.

This is the first time the Royal Navy has assisted with the transportation of vaccines, ensuring the vital doses were onboard the ship within 90 minutes of the RAF aircraft touching down in the Falklands.

“The entire operation has been a great team effort from start to finish. I am hugely proud of every member of the BFSAI team involved in all elements of this epic journey”.

HMS Forth is currently deployed in the South Atlantic, and has patrolled the Falkland Islands, South Georgia and Tristan da Cunha during the course of the last month.

Earlier this year, the RAF transported vaccines to Gibraltar, the Falkland Islands, Ascension Island in support of the FCDO’s vaccine rollout to the Overseas Territories.

Tristan da Cunha belongs to the most remote groups of inhabited islands in the world. The island itself has a long-standing connection with the UK Armed Forces dating back to World War Two, when the whole island was commissioned by the Royal Navy as a U-Boat monitoring outpost and a signals intelligence station named HMS ATLANTIC ISLE.