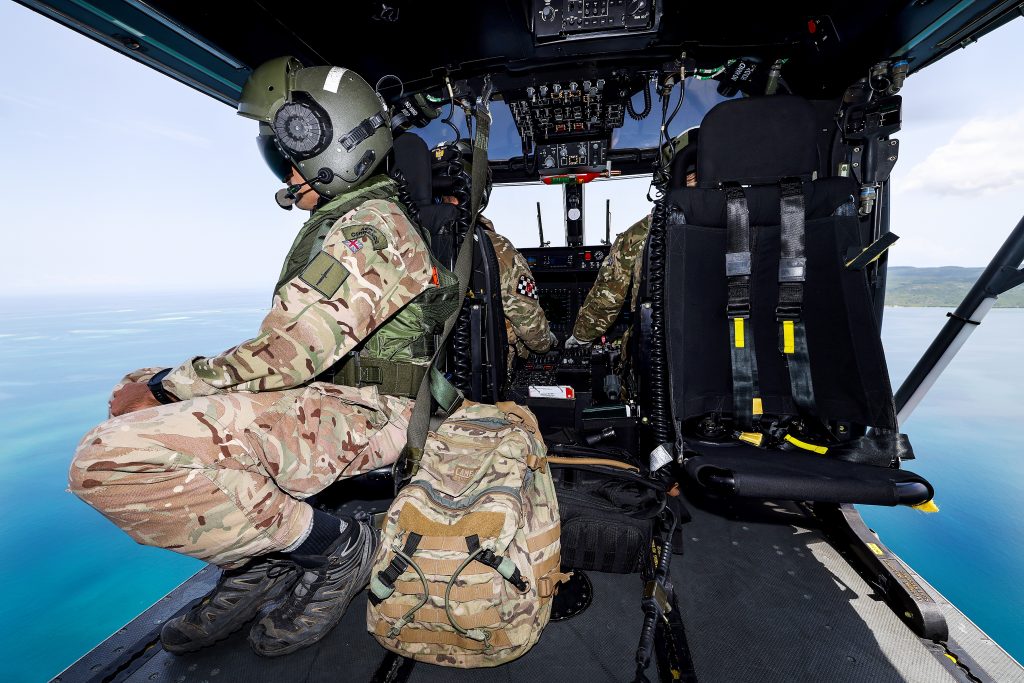 Royal Navy aircraft have helped survey some of the devastation in Haiti as they fly dawn-to-dusk flights over the earthquake-hit Caribbean country.

A helicopter from support ship RFA Wave Knight has been in the air since Friday, flying over parts of the Tiburon Peninsula – epicentre of the quake which struck on Saturday August 14 – to locate villages, towns, and infrastructure urgently in need of help.

The information the aviators are gathering is helping direct the international aid effort, which Wave Knight has been supporting since Wednesday.

The support ship – which is flagship of the Royal Navy’s Caribbean task group, also including patrol vessel HMS Medway – has been providing fuel for US Army Black Hawk helicopters heavily engaged in the relief effort ashore in Haiti.

Saving the helicopters from 228 Regiment the long flight back to their bases for refuelling, providing rest for crews and any mechanical repairs, the ship’s company have helped to ‘turbo charge’ the American effort.

By committing her Wildcat helicopter – normally based at RNAS Yeovilton in Somerset – the ship is helping to concentrate that effort.

Joining the helicopter’s flight crew on the missions over Haiti are Captain Jake Lott, a Royal Engineer who’s in charge of the specialist disaster relief team of soldiers, engineers and Royal Marines embarked on RFA Wave Knight, and task group photographer Leading Seaman Rory Arnold whose imagery is pored over by those directing the relief mission.

“Engineer reconnaissance and conducting damage assessment is a core part of the Crisis Response Troop’s skillset. It’s great to see it being put to such good use,” said Captain Lott.

Leading Photographer Arnold added: “Knowing that my work is being used to assess the areas damaged by last week’s earthquake is humbling. It’s great to see my training being used to help those affected.”

The Wildcat – callsign Knightrider – is embarked in Wave Knight for precisely such missions, but can also be used for moving supplies, aid and personnel around if required.

The Flight Commander, Lieutenant Cdr Eifion Parri, 213 Flight Commander “The Wildcat is a brilliant intelligence-gathering aircraft – and it’s been great to use it to full effect. Embarking a photographer and Commando Engineer to gather imagery and conduct the damage assessment has shortened the time taken after the flight to feed analysis back to 228 Regiment and Joint Task Force Bravo.

“It’s great to know that our work as a team is being used to prioritise the aid efforts ashore.”