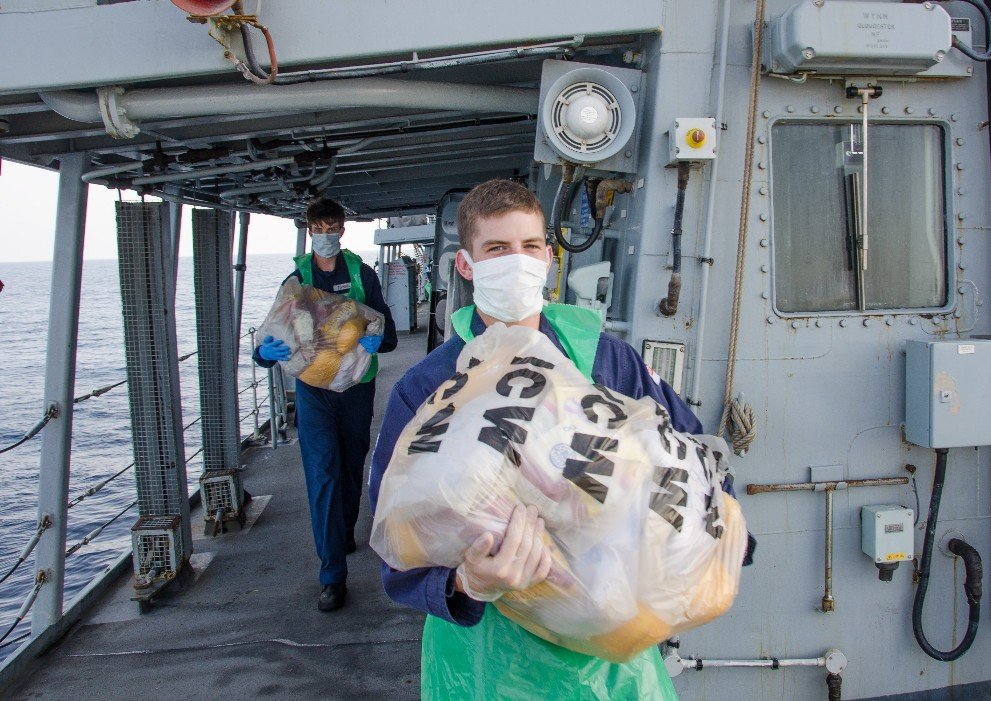 Type 23 frigate HMS Montrose, working alongside the French Cassard-class frigate FS Jean Bart, has made a major drugs bust in the Arabian Sea…

The two warships worked together to intercept a dhow carrying 94kg of heroin and 76kg of crystal methamphetamine – this haul of narcotics is estimated to have a street value of over a million US dollars. Narcotics smuggling in the region is linked to major criminal networks and terrorism.

The suspicious dhow was initially located by FS Jean Bart’s helicopter and boarded by a team from the French ship who secured the vessel and conducted an initial investigation. Royal Navy and Royal Marines personnel from HMS Montrose then took over the search of the vessel and the team located and seized a large number of packages containing the drugs.

The Commanding Officer of HMS Montrose, Commander Ollie Hucker, said he and his ship’s company have been training hard for this type of mission: “We were conducting a Replenishment at Sea with a US Navy Tanker in the early morning when I received the news of the suspicious dhow; we were ready to commence a successful counter narcotics operation with the FS Jean Bart in the afternoon.

“This demonstrates the flexibility and professionalism of the Royal Navy and French Navy and the very close interoperability with our coalition allies. I am immensely proud of my Ship’s Company who have all played their part in tackling the international drugs trade from the sea and have prevented the landing of these drugs in other countries, perhaps even the streets of the UK.”

The warships were operating as part of the multinational Combined Task Force 150. This is part of a 33 nation coalition and has responsibility for counter terrorism and counter narcotics across a large area of the Arabian Sea and Indian Ocean. CTF 150 is a joint command shared between the Royal Navy and French Marine Nationale and is led by Commodore Ed Ahlgren of the Royal Navy.

Cdre Ahlgren said: “This interdiction is testament to the outstanding teamwork and collaborative co-operation within CMF that has been demonstrated in my area of operations. I am enormously grateful to French Ship Jean Bart for initially locating and securing the vessel in preparation for handover to another coalition unit.

“HMS Montrose then responded in a tradition I would expect from the Royal Navy. Her Ship’s Company showed true professionalism and grit in the manner in which they conducted the boarding. We have now successfully stopped this particular illegal cargo reaching other regions of the world and probably prevented well over a million dollars of funding for those who would wish to do us harm.”

One of the Rigid Hull Inflatable Boat drivers is Advanced Tactical Coxswain Able Seaman, Seaman Specialist Ben Davies: “Working at night was particularly challenging. Once my training kicked in, I was able to manoeuvre the sea boats successfully alongside the dhow to allow members of the boarding team to embark safely as well as recover them and the drugs, back on to HMS Montrose.”

This brings the total of drugs seized by CMF warships in 2019 to over 2,000kg of heroin, just over 130kg of crystal methamphetamine and nearly 50,000kg of hashish. Locally, this would equate to around over 46 million US Dollars and is ahead of the total achieved in 2018 at this stage of the year. By the end of the 2018, CMF warships had seized narcotics worth over 75 million US Dollars.