Sennybridge Pair Go Back To The Future For SSAFA 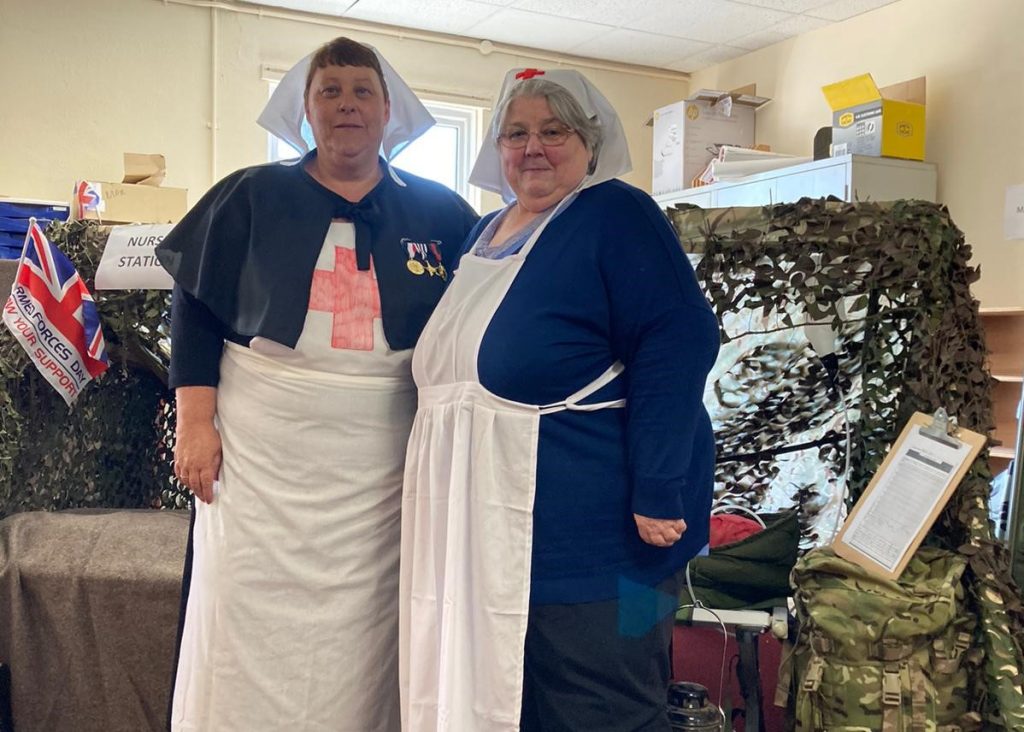 The pair – Site Operative Mair Warrilow and Training Area Operative Cheryl Higgins – decided to mark this year’s Armed Forces Week by building a makeshift WWII field hospital in their office, complete with a bed, stretcher, and first aid kit, and dress in period nurses’ uniforms. Among other fundraising activities were a cake sale with bakes donated by ESS and St Mary’s Bakery in nearby Brecon.
Mair said: “I love dressing up so thought we’d have a bit of fun and try and raise some money for SSAFA at the same time. SSAFA is not only a UK-wide charity, but is also the oldest tri-service charity in the UK that that has been providing lifelong support to serving men and women and veterans from the British Armed Forces and their families or dependents since 1885.
“I roped Cheryl in, and we built our nurses’ station, and since then, donations have been coming in thick and fast and we are so pleased to be able to say that we have raised more than £700 so far from online and offline donations for SSAFA.
“Big thanks to everyone who has come to see us and made a donation; we hope we made you smile.”
Mark Griffiths, Regional Operations Manager, added, “Mair and Cheryl really pulled out all the stops to make a great effort for Armed Forces Week, which was very well appreciated by all. Well done nurses.”
Sam Nowell, SSAFA’s Corporate Fundraising Manager, said: “On behalf of SSAFA, the Armed Forces charity I’ve got to give a big shout-out to Mair and Cheryl for this amazing effort and the amount raised.
“It’s only because of funds raised that SSAFA, the UK’s oldest tri-service charity, can carry on its work of providing practical, emotional, and financial support to our Forces and their families. Support like this means SSAFA can be there for people in need, from Second World War veterans to those who have served in more recent conflicts or are still currently serving, and their families – any time they need us, in any way they need us, for as long as they need us.”
Donations can still be made by visiting justgiving.com/Mair-Warrilow.
For more information about SSAFA, including how to fundraise of volunteer, visit ssafa.org.uk.