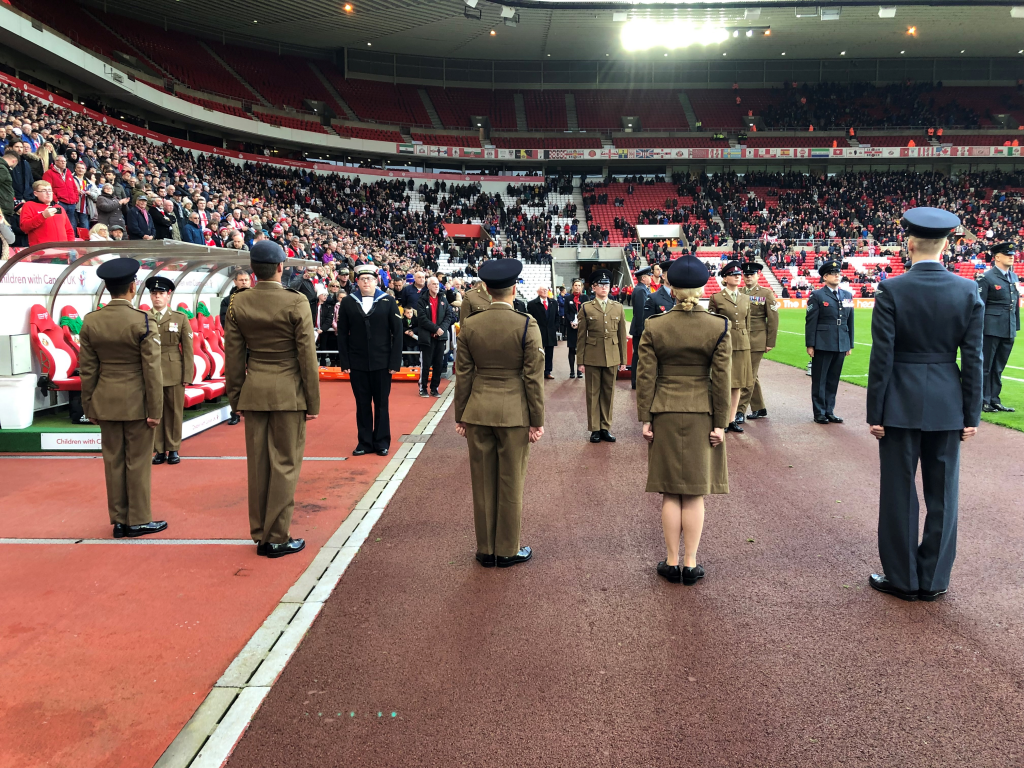 Sunderland AFC and its official charity, Foundation of Light, have once again been recognised for their support of the Armed Forces, veterans and their families, by achieving the Silver award of the Ministry of Defence’s Employee Recognition Scheme, becoming the first football club in the North East and Yorkshire to achieve the status.

The achievement cements their support for the Defence and the Armed Forces’ community, and formally recognises the role both organisations play in advocating that those who serve or who have served in the Armed Forces, and their families, are treated fairly.

The announcement of the silver award means that Sunderland AFC and Foundation of Light are on track to become the first English football club and charity to achieve the Defence Employer Recognition Scheme Gold Award by 2021.
The Black Cats have a rich heritage of showing their support for the Armed Forces community and over the last few years have created a range of initiatives, including the employment of veterans, offering flexibility to reservist employees and families of serving personnel.

The Club and Foundation both work with a range of military organisations, including local charity Veterans in Crisis Sunderland (VICS) who support veterans with unresolved trauma issues.

Earlier this year VICS and Foundation of Light were awarded a £100,000 grant from the Armed Forces Covenant Fund to reduce social isolation and tackle issues that veterans and their families experience. The two-year project will support the Foundation to deliver a range of fun, family-based activities including playgroups, sports, arts and crafts, sensory play, baby bounce, cookery and wellbeing sessions at the Beacon of Light, the award-winning community hub on Stadium Park.
Together, the Foundation of Light and the Club also support forces personnel into employment with opportunities created within the Foundation of Light’s employability programmes and SAFC match day security roles.

Both organisations also ensure that military history is integrated into learning programmes for Sunderland AFC and Foundation of Light youth teams and have started to work with the Armed Forces football associations to support the development of football within the services.

Sunderland AFC is a long-standing supporter of ‘Tickets for Troops’, the organisation that provides free tickets to members of the Armed Forces. The club also holds a special Remembrance game each year, welcoming serving military personnel, families and veterans’ groups to the Stadium of Light and raising funds for the Royal British Legion.
The Foundation of Light also works with the NHS to provide a Veterans’ Mental Health Complex Treatment Service at the Beacon of Light.

Johnny Mercer MP, Minister for Defence People and Veterans said: “I am grateful for the positive attitude and flexible policies these organisations have adopted towards the defence community, which is testament to the fantastic contribution our serving personnel, veterans and their families can make to any organisation. I am delighted that so many companies are supporting our people and that, through this Scheme, we can give them the public recognition they deserve.”

Speaking about the award, Sunderland AFC Chief Executive Jim Rodwell said: “There is a very strong bond between our football club and the military. We know that the North East is a hugely important partner for the Armed Forces, and Sunderland has a proud history of support. We are delighted that our ongoing commitment to helping serving personnel, veterans and their families has been recognised by the awarding of the Silver award.”

Foundation of Light Chief Executive, Lesley Spuhler OBE, said “We are proud to be signatories to the Armed Forces Covenant, alongside Sunderland AFC and that our ongoing commitment to the Armed Forces family has been recognised once again through the Employee Recognition Scheme.

“As well as embedding forces-friendly policies, there are so many ways in which we have been proud to make a difference to Armed Forces communities over the years. Supporting those who serve is just one of many important strands of our work across Sunderland, South Tyneside and Durham. We’re proud to play our part in making a difference, and with this award we have a renewed sense of purpose to advocate on behalf of defence.”

Brigadier Paul Baker, Chief Executive, North of England RFCA said: “There has always been great support for the Armed Forces within the North East of England but the growing number of companies prepared to publicly demonstrate this support is truly heartening, especially in such challenging times. These Employer Recognition Scheme awards are a recognition of the backing and encouragement provided to their employees who are also Reservists, Adult Volunteers within the Cadet Forces, Veterans and their families. Well done to you all.”

Colonel Neil Blenkinsop, Commander Logistic Support, Headquarters 1 UK Division who supported the Club and Foundation with the signing of the Armed Forces Covenant in November last year commented: “I am delighted to learn that Sunderland AFC and the Foundation of Light have received a prestigious Silver award in the Defence Employer Recognition Scheme.
“This is testament to their fantastic work undertaken in support of the Armed Forces Community. The opportunities the Club and Foundation provide to Armed Forces personnel, veterans and their families are greatly appreciated. This award affords Sunderland AFC and the Foundation of Light with the recognition they richly deserve.”

Pathfinder International and editor Mal Robinson were instrumental in advising the Black Cats on signing the Armed Forces Covenant back in November 2019 and all at the magazine are thrilled to see their good work with the military community continue.