Friends, family and special guests congratulate and welcome our next generation of officers – the class of MDP 50. 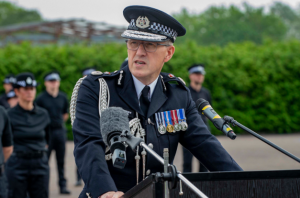 On Friday 3 September the Ministry of Defence Police’s (MDP’s) first pass out parade event in almost two years took place at its Headquarters at Wethersfield in Essex, to celebrate the achievements of our latest new recruits and half a century of the MDP, ahead of the Force’s 50th anniversary on 1 October.

British Forces Broadcasting Service (BFBS) covered the event, which featured displays by our firearms and dog teams, music from the British Army Band Colchester, and student awards, following 18 weeks of intensive training for the new recruits.

Other special guests included senior MDP officers and civilian staff and members of the Police Committee, the Defence Police Federation, and the Retired Officers’ Association.

For previous new recruits who have passed out of initial training during the pandemic there were no opportunities for friends and family to attend formal ceremonies, and so Friday’s event was a memorable day for the Force, the students, and their loved ones, made even more poignant by its special recognition for the Force’s 50th year.

Whilst much of the focus at this ceremony will be on our latest course of new recruits, and for them on their future, it is important we recognise that they join a Force with a proud history.

50 years ago, Mr F A Seward became the first Chief Constable of the Ministry of Defence Police. He too presided over parades such as this; where officers were attested with an oath of office following completion of basic training, which included teaching the principles of policing, first coined by Sir Robert Peel in 1829.

As police officers, our new colleagues are still required to uphold the oath they take, working to deliver the same fundamental principles. In doing so they are guided to understand, as all new police officers before them have, to whom they are accountable and where their loyalty lies. Those aspects of their role in society are as valid today as they were 50 years ago.

So, as we celebrate the achievements of these new recruits here today, we do so in recognition of a tradition of public service, which has its origins in the nineteenth century, at a point in time when we also celebrate half a century of the MDP. The officers before you will now become part of upholding our traditions into the next half century of our history, and they should feel very proud to be part of the MDP as the Force moves forward.

See yourself as a future MDP Officer? Then come along and chat to the team at Pathfinder’s Armed Forces & Veterans Resettlement Expo taking place in Bristol on October 28. For more details and how to register for free please see HERE!