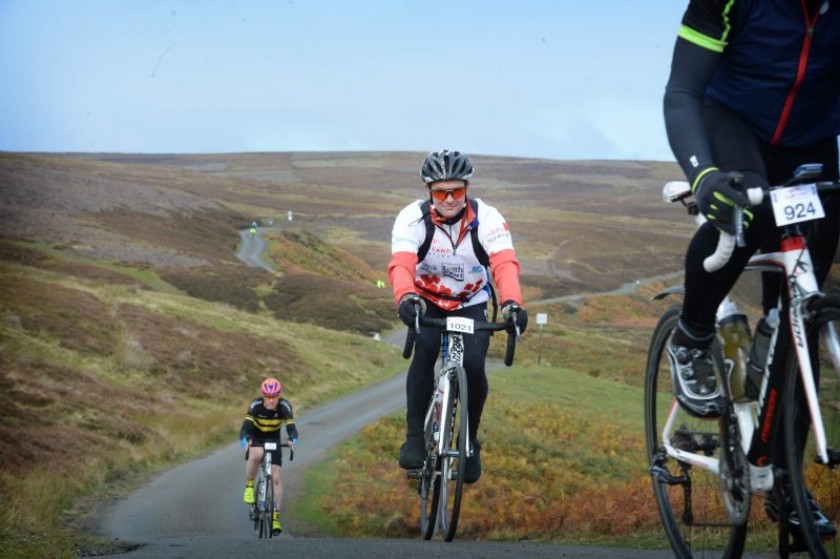 The Sportive, which first took place in 2014, gave riders a choice of three routes to suit a variety of levels of experience and fitness. All three took participants along the beautiful East Lothian coast and then back though its stunning hills and countryside, with the 100-mile circuit also taking riders over the challenging Lammermuir Hills and into the Scottish Borders.

This year’s event again featured the timed hill climb just past North Berwick, which allowed riders to take on a short sharp hill climb and battle it out to become the ‘King’ or ‘Queen of the Heugh’. This year, a piper was on hand to encourage riders up the steep climb.

Taking part in the short route were friends and neighbours Sue Fernandes, 52, and Mary-Lou Docherty, 56, from Cramond, Edinburgh. Mary-Lou is a Risk Manager, while Sue is an Investment Manager, whose brother and sister-in-law both serve in the RAF. It was their first Poppyscotland Sportive having only signed up in the past couple of weeks, and they are both raising money for the charity.

They said: “We heard it was a great course and a really good event so we signed up. It was an excellent route but getting to the top of the Heugh was a relief as that was a tough challenge! It’s a friendly event, well organised and very inclusive, and it was nice to chat to other riders at the start. It’s nice to have a bit of support out there with locals cheering you on, and we will definitely do it next year.”

Organiser Katriona Harding said: “”Over the past six years, more than £210,000 has been raised, which goes towards our life-changing support of Scotland’s Armed Forces community that we provide. Money raised from events like the Sportive has allowed Poppyscotland to launch our new Welfare Support Service, with a dedicated team across the country to help veterans on a local level.

“Our ambition to reach even more veterans over the coming year is reliant on our ability to raise more money. While the Poppyscotland Sportive is great fun, the fundraising our amazing cyclists undertake makes a life-changing difference to the Armed Forces community to ensure that we are behind them. Always.”