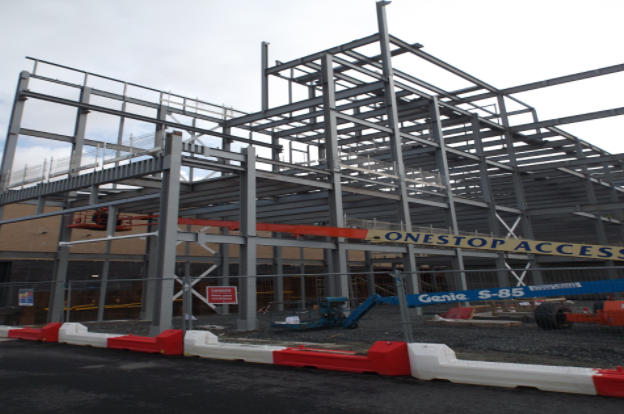 Work is well underway on a new training facility which will secure HMNB Clyde as the central base for submariners in the UK.

Last year the Defence Infrastructure Organisation (DIO) awarded a contract worth £100-million to Kier Graham to deliver the works, which are expected to complete in early 2022.

The Submarine Training Facility (SMTF) building will provide training for submariners on the new Dreadnought Class submarines, which will maintain the UK’s Continuous At Sea Deterrent. Designed and built in the UK, these submarines will employ world-leading and cutting-edge technology

Training currently based at the Royal Naval Submarine School (RNSMS) at HMS Raleigh and the Defence School of Marine Engineering (DSMarE), the Nuclear Systems Group and Nuclear Department (ND) at HMS Sultan will also transfer to the new facility.

This week the new building started to take shape as steel frames were put into place, marking a significant construction milestone in the project.

The new SMTF facility will be located adjacent to, but separate from, the recently completed submarine escape, rescue, abandonment and survival (SMERAS) facility on the base.

The works are part of a wider Defence plan to create a Submarine Centre of Specialisation located at HMNB Clyde, which is already home to the core of the Submarine Service, including the nuclear deterrent and new generation of hunter-killer submarine. DIO is investing a total £1.6-billion in facilities at HMNB Clyde .

This will ensure that Royal Navy personnel can train in a state-of-the-art environment for many years to come.

These are exciting times for all Submariners. With training delivery being reshaped to provide modern and highly realistic training in classrooms, simulators, by virtual and synthetic means, as well as online, it means Submariners no longer have to travel to different locations to train. Everything will be delivered at HM Naval Base Clyde helping to improve their career and domestic balance.

The Submarine Training Facility project is the final piece in the creation of a Submarine Centre of Specialisation at HM Naval Base Clyde. All future training, from the Submarine Qualifying Course to the world-renowned ‘Perisher’ Command Course, will now be based on the Clyde along with the Royal Navy’s entire fleet of submarines.

As part of the UK, Scotland benefits from billions of pounds of Defence contracts placed directly and indirectly with hundreds of companies, which sustain thousands of jobs.

The UK government is firmly committed to Scotland’s continued vital role in Defence, and the major investment in the future of HMNB Clyde is a testament to this.