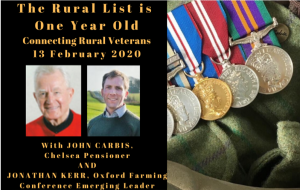 The Rural List will celebrate its one year anniversary with a reception at Farm 491, the Royal Agricultural University’s agricultural technology innovation hub, on 13 February from 6.30 pm.

Employers, veterans and service personnel interested in pursuing a career in the land-based sector will be treated to locally-produced food and drink and have the opportunity to exchange best practice and information to support each other as they move towards their follow-on careers in agriculture, horticulture, outdoor education and land management. They will also hear from two inspirational guest speakers:

John Carbis has been a Chelsea Pensioner, a resident at the Royal Hospital Chelsea, for over 20 years and will be wearing his trademark scarlet tunic. John will reflect on the values and attributes of the service-person and how what he learnt during his army career has stood him in good stead for a positive professional life in the fifty years since.

Jonathan Kerr was recently named as an Emerging Leader by the Oxford Farming Conference. He currently works as a Farm Manager in Wiltshire, employed by Velcourt. His success in farming follows a first career in the Army, where he developed his foundation in leadership and management. Jonathan will describe his route from Sandhurst to farm office.

Since its launch in February 2019, The Rural List has met monthly, with a steadily growing attendance, hearing from guest speakers from across the land-based industry, many of whom will join us on this landmark occasion. We have also celebrated the success of several delegates who have entered new careers having benefitted from information and support gained through The Rural List.

During 2020, The Rural List will go truly national with new sessions planned for Scotland, East of England, West Midlands, Northern Ireland and Wales.

The Rural List was established with the support of The List, a specialist executive search firm for ex-forces personnel, and is affiliated with The Liquid List network. Now facilitated by Ruralink, it will expand to several sites to achieve a national coverage during 2020. (Details on forthcoming and meetings are at: www.ruralink.org.uk/the-rural-list).