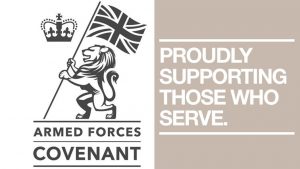 Thousands more businesses, charities and public organisations have this year pledged to support veterans, service personnel and their families by signing the Armed Forces Covenant.

The pledge – which commits to ensuring the Armed Forces community is treated fairly – has been made by nearly 1,500 organisations this year including the London Fire Brigade, Leicester Tigers Rugby Club and Yorkshire Water.

Published on the 7 December, the annual Armed Forces Covenant Report outlines this year’s major achievements, with new measures including personalised career support for military spouses, extended Help to Buy access and a new pilot scheme giving service personnel more choice about where they can live.

Since 2014, more than 22,000 service personnel have been helped on the housing ladder by the Forces Help to Buy scheme, while this summer, a £200-million cash injection provided vital improvements and renovations to service family and single-living accommodation.

Over 6,000 organisations have signed the Covenant since 2011 with many companies pledging to offer free training and actively recruit veterans. Many have also committed to offering part-time or flexible working patterns to reservists, military spouses and partners.

Our service personnel make an immense sacrifice for this country, and the Armed Forces Covenant is at the heart of our pledge to ensure they are treated with fairness and respect.

Over the past year we’ve provided a cash boost for family accommodation, introduced free breakfast and after school clubs for military children and enhanced employment opportunities for veterans with our guaranteed interview scheme.

6,000 signatories is an important milestone and I’m determined we do all we can to ensure our people are not disadvantaged by their service.

Organisations including The West Midlands Fire Service, Coventry City Football Club, Royal Bank of Canada and Nottingham Trent University have also signed the pledge this year, joining high profile signatories such as Microsoft, Amazon and the Metropolitan Police in their support for the UK Armed Forces.

The Covenant also recognises the need for UK Armed Forces personnel to be supported throughout their lives in areas including healthcare, career, transitioning to civilian life after service and in older age.

The report outlines achievements this year in veterans’ policy. October marked one year since the establishment of the Office for Veterans’ Affairs. Throughout 2020, the government has launched a number of initiatives aimed at making the UK the best place in the world to be a veteran. These include:

Furthermore, the Defence Transition Services organisation was established to assist those facing the greatest difficulties in successfully transitioning after leaving service, while 800 GP practices in England are now accredited as veteran friendly. This helps doctors provide extra support to ex-military personnel who may face additional challenges when returning to civilian life.

As set out in both the manifesto and Queen’s Speech, the government is committed to further strengthening the Armed Forces Covenant in law and will deliver on this in the new year.