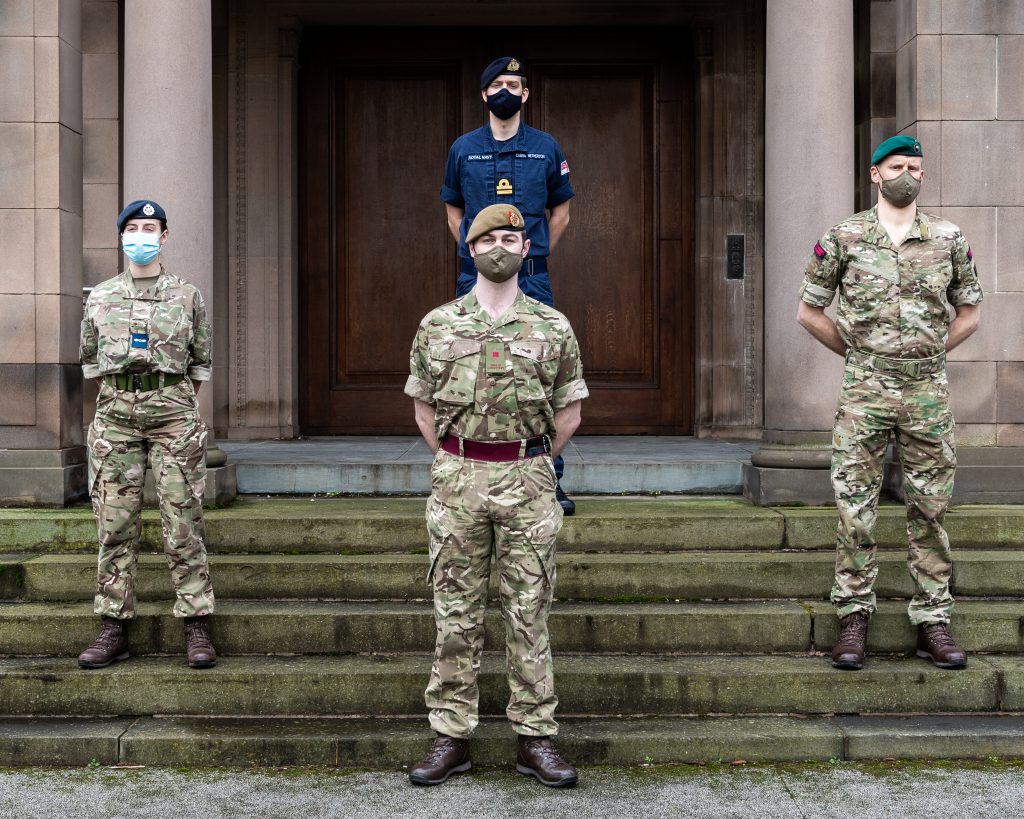 Reservists from all three military services have joined the fight against Covid19 in Greater Manchester.

Our Reserve Forces have been providing a valuable contribution to the various strands of assistance to civil authorities since early last year, but this is the first time a formed force of this size, comprised solely of Reservists has been generated for a bespoke task. Each element is integrated with a Regular Army unit headquarters already supporting delivery of community testing in Greater Manchester.

A total of 82 Reserve personnel have been deployed, with the Army component of 29 soldiers drawn from 4th Battalion, The Lancashire Regiment (4 LANCS), The Queen’s Own Yeomanry and 8th Battalion, The Rifles. They will be integrated with C Coy, 1st Battalion The Rifles, which is already on task in Manchester, and will be supporting Oldham Council.

Defence Secretary Ben Wallace said: “I’m proud that Reservists from all three services, many from Manchester itself, have answered the call to step up and support their local community. These soldiers, sailors and air personnel have joined the largest UK Armed Forces homeland deployment in peacetime and will be working alongside Greater Manchester Combined Authority to test at-risk members of the community.”

Colonel Russ Miller, OBE, Commander Army Headquarters North West, said: “I am delighted to welcome Reserve components from all three Services to join the ongoing military support to Greater Manchester’s Targeted Testing at Scale project. As the military support continues into its second month, the Reserves will play an increasingly important part of the project, both carrying on with the delivery of Asymptomatic Testing, and training each Borough’s follow-on workforce to develop testing capability for the longer-term.”

Kingsman Michael Bennett, from 4 LANCS, who works for a Top 40 law firm, said: “My manager is extremely proud that I’m a Reservist and contributing to this operation. Everyone wants to get back to normal and anything we can do to speed that up. As soon as the call came in, I was ready to start on task the next day.”

Leading Aircraftman Gemma Terrey, based at RAF Woodvale, is currently studying a Masters in psychological wellbeing and clinical practice in Manchester and intends to apply for a traineeship in the NHS next year. She said: “Everyone has been really inspired by the NHS workers over the last year and it would be nice to be a part of that. It’s a great experience as a Reservist to be integrated with the NHS.”

Marine Ross Cooney, from the Royal Marines Reserve, Merseyside Detachment, who owns a performance and consultancy business, said: “I was fortunate last year to be part of the mobilisation to help with this and to be able to do it again has been very rewarding. The great thing about the Reserves is that we are able to manage our time really well and bring our experiences outside of the military. It’s also great working alongside the regulars.

Lieutenant Kevin Cabra-Netherton, from HMS Ceres, a travel business owner, who was previously a Warfare Officer in the regular Royal Navy, said: “The great thing about the Reserves is that you get people from all walks of life and such broad backgrounds that you have such a broad spectrum of skills and expertise. Any opportunity to work alongside the regular forces is really great for our broader development and it’s good to learn about what the other services are doing. On an operation like this, it doesn’t matter what background you are from, we are all doing the same job and working towards the same goal.”

The Reserves force will be on task until 26th February.