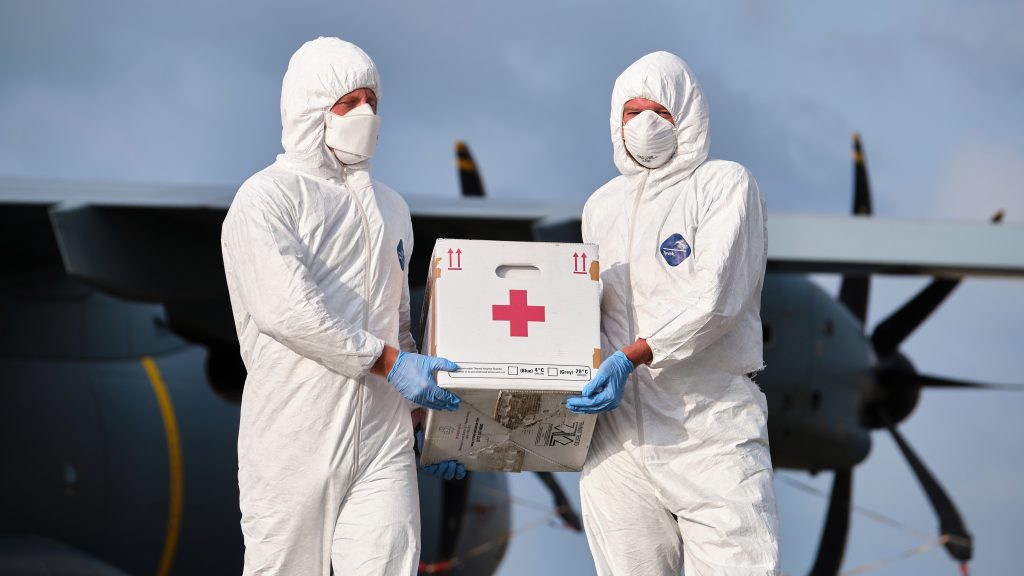 The RAF have delivered 6 ventilators and medication to support the Overseas Territories during the COVID outbreak and RFA Argus conducted training exercises in the Caribbean in preparation for hurricane season.

On 08 May an RAF flight delivered Foreign Office-sourced supplies to the Turks and Caicos Islands including 6 ventilators, blood and medication to support the Islands’ health care systems during the coronavirus pandemic. This flight is part of the wider support being offered by the UK Government to its Overseas Territories in order to maintain access to essential goods including food, fuel and medical supplies.

Alongside this, the Royal Navy’s disaster relief specialists on RFA Argus are preparing for hurricane season by testing their skills across six of the Overseas Territories. Operating in and around Bermuda, the British Virgin Islands, Anguilla, Montserrat, the Cayman Islands, and Turks and Caicos, the crew have been familiarising themselves with the terrain of each island and identifying potential landing sites should aid need to be delivered.

RFA Argus and troops on board have conducted exercises on Montserrat and Turks and Caicos. The exercises use simulated scenarios to test the crew’s ability to quickly land personnel, equipment and stores ashore in the aftermath of a disaster and deliver life-saving aid to local populations.

“The commitment of our Armed Forces to support the Overseas Territories in times of pandemic or national disaster is unwavering.

“We will continue to support our partners in the Caribbean, engaging with both the local communities and authorities as they prepare for the hurricane season and adapt to the challenges of the COVID-19 outbreak.”

“We’ve seen how hurricanes can devastate communities in the Caribbean and when combined with the coronavirus, that devastation could lead to even more lives being lost.

“By providing life-saving aid alongside the world-class expertise of the British military, the UK is making sure British nationals and others living in the Overseas Territories, are prepared and supported ahead of the hurricane season.”

The early deployment of a Royal Navy ship ahead of the hurricane season is vital for the personnel on board to be able to gather local knowledge of the islands and establish working practices with local authorities. Crew on board RFA Argus have been practising how to deliver aid and support local residents if a hurricane hits during the COVID-19 pandemic.

The ship carries hurricane-related aid from the Department for International Development such as water, ration packs, medical equipment and materials to repair damage and clear blocked roads. It is staffed by an experienced team of sailors, aviators and marines equipped to deploy in the wake of a humanitarian disaster.

Other recent support provided by the Armed Forces to the Overseas Territories includes:

• Small security assistance teams have been deployed to both the Cayman Islands and the Turks and Caicos Islands. Each team will reinforce the capacity of local police and support local authorities
• A new military co-ordination cell has been formed with our French and Dutch allies, optimising our support for Overseas Territories in the Caribbean as they co-ordinate their response to COVID-19.
• A small medical team alongside 2 Intensive Treatment Units have been deployed to the Falkland Islands and the RAF has also flown in supplies of oxygen and medicine
• 310kg of essential supplies have been delivered to Ascension Island and St Helena
• 175 personnel have been deployed to Gibraltar, to support the delivery of food and medicine to residents

The deployment of military capabilities and UK personnel is just one way the UK Government is supporting the people of the Overseas Territories. Specialist health professionals from Public Health England are providing crucial guidance and training on infectious disease management and we are providing advice on sourcing medical personnel and equipment.

There are around 270,000 people living in the Overseas Territories, most of whom are British nationals.