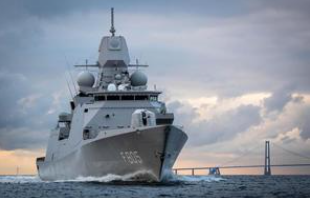 Royal Netherlands Navy frigate HNLMS Evertsen will join the UK Carrier Strike Group for the duration of its inaugural deployment – from the North Atlantic, through to the Mediterranean, Indian Ocean and on to the Indo-Pacific. The strike group will undertake a range of operations and training with allies and partners, including maritime missions with NATO in the Mediterranean and Coalition operations in the Middle East. As an Air Defence Frigate she will provide vital air defence protection to the Carrier and control air missions from her operations room.

Frigate Evertsen joins a squadron of US Marine Corps F35 jets and a US Navy Destroyer as a contribution from our NATO Allies to the 2021 deployment. They will be integral elements of the Carrier Strike Group, showcasing NATO’s first 5th generation Carrier Strike asset and demonstrating NATO’s credible deterrence through joint expeditionary capability.

CSG21 will be an ambitious deployment, covering over 20,000 nautical miles from the North Atlantic, through to the Mediterranean, Indian Ocean and on to the Indo-Pacific.

The Netherlands’ participation adds another dimension to this UK sovereign deployment. Our NATO, JEF and European Ally’s commitment signals the Carrier Strike Group’s contribution to collective defence and credible deterrence.

This joint deployment will offer a unique opportunity for our forces to integrate and operate together in support of truly shared global defence and security challenges.

Minister of Defence of the Kingdom of the Netherlands Ank Bijleveld-Schouten said:

I am very pleased that HNLMS Evertsen participates in the UK Carrier Strike Group. This provides the Royal Netherlands Navy with the unique opportunity to exercise in this type of international setting, in particular with the UK and the US, but also with other partners.

The UK is a strategic partner and important NATO ally of the Netherlands, also post-Brexit. Participation in the Carrier Strike Group enables the Royal Netherlands Navy to provide a valuable contribution to the NATO alliance in the near future. The Armed Forces of the United Kingdom and the Netherlands have worked together intensively for years. This new combined activity underlines our close ties.

HNLMS Evertsen is a highly sophisticated air defence frigate, equipped with weapons and sensors that will protect the Carrier Strike Group from hostile aircraft and missiles. She is also capable of conducting maritime security duties, operating either as part of the Strike Group or independently.

The Netherlands have played a significant role in the build up to the deployment through participation in a series of multi-national exercises throughout 2020, most recently Exercise Strike Warrior last October in the North Sea.