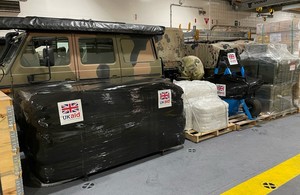 The UK is sending vital humanitarian assistance and redeploying a Royal Navy ship to support Tonga respond to the catastrophic tsunami that hit the islands.

The UK will redeploy a Royal Navy ship and work with Australia and New Zealand to deliver vital aid to Tonga, after a once in a thousand year volcanic eruption caused a catastrophic tsunami to hit the islands.

UK-funded supplies will be onboard the Royal Australian Navy’s HMAS Adelaide, which is due to set sail for Nuku’alofa this morning (Friday 21 January), while Defence Secretary Ben Wallace has authorised Royal Navy ship HMS Spey to sail to Tonga to support the humanitarian and disaster relief effort.

In total 17 pallets of supplies are being sent on HMAS Adelaide today, all items provided were at the request of the Tongan government, including 90 family tents, 8 community tents and 6 wheel barrows.

The humanitarian aid and assistance will provide support to the Commonwealth nation, which has suffered significant damage and loss of life, to respond to the catastrophic event.

HMS Spey is alongside on a planned stop in Tahiti and will set sail for Tonga later today, having embarked supplies including water and medical equipment.

Our thoughts are with those caught up in the appalling devastation and loss of life caused by the tsunami in Tonga.

UK supplies and technical expertise will provide urgent assistance to Tonga, working alongside Australia to support a stable and prosperous Indo-Pacific.

In response to the devastating eruption in the Pacific Ocean I have instructed HMS Spey to sail to Tonga to assist in the humanitarian aid operation.

The UK will work closely with Australia and New Zealand to assist the recovery effort in Tonga and stands ready to support our long-standing Commonwealth partner.

In addition, the UK has offered to fund the deployment of crisis experts through the United Nations. They would support the Tongan authorities to coordinate the international response.

The UK-funded International Federation of Red Cross and Red Crescent Societies’ Disaster Relief Emergency Fund (DREF) has also released £345,000 to support Tonga. The UK has committed a £6 million contribution to the DREF through an annual £1.5 million donation 2020-2023.

The UK is a longstanding and trusted partner to Pacific Island countries and the UK Armed Forces are committed to stability in the region, and Offshore Patrol Vessel (OPV) HMS Spey has deployed to the Indo-Pacific for five years following the Integrated Review.

As directed in last year’s Integrated Review, HMS Spey is tasked with providing a quick response to security threats in the region and working alongside allies to uphold international laws and norms in an era of constant competition.

As part of New Zealand’s support, Navy ship HMNZS Wellington is supporting surveying of Nuku’alofa’s harbour area. A Royal Navy exchange officer, Lieutenant Greenfield is embarked in HMNZS Wellington as the Officer in Charge of the deployed hydrographic surveying team.

The UK has a long and proud history of supporting disaster relief alongside our allies and partners around the world.

I’m proud that the Royal Navy can play its part in the efforts to respond to the devastating volcanic eruption and tsunami in Tonga.