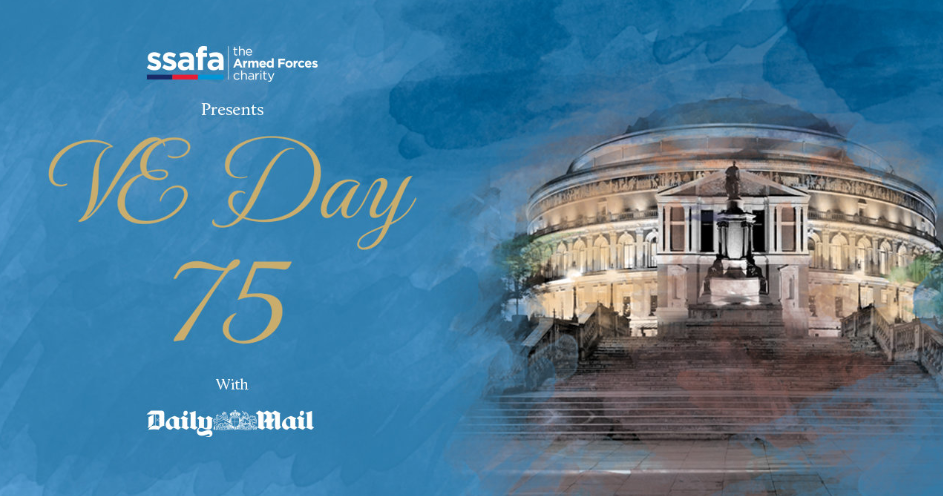 “My dear friends, this is your hour. This is not victory of a party or of any class. It’s a victory of the great British nation as a whole.” On 8th May 1945, Prime Minister Winston Churchill made his ‘Victory in Europe’ speech, in which he officially announced the unconditional surrender of Germany and the end of the Second World War in Europe.

Exactly 75 years since that momentous day, SSAFA, the UK’s oldest national tri-service military charity, presents VE Day 75 With The Daily Mail, live from the Royal Albert Hall. The Royal Philharmonic Concert Orchestra, plus special guests, will unite the nation on May Bank Holiday, Friday 8th May 2020 as the country reflects on this significant anniversary.

The Second World War represents the greatest conflict the world has ever seen. VE Day 75 will honour and remember those who made the ultimate sacrifice in order to liberate Europe, while at the same time celebrating the victory for Britain and its Allies.

Join SSAFA for an inspiring and patriotic evening featuring the best of British. Audiences will enjoy epic, stirring and emotional music from some of the country’s greatest composers – from Elgar’s Nimrod to Walton’s Spitfire Prelude & Fugue, Holst’s Planet Suite to Ron Goodwin’s Battle Of Britain Theme and many more.

The special event will also include appearances on stage by Second World War Veterans and a line-up of guest performers. By attending this event, audiences will be supporting SSAFA which offers support to those currently serving, regulars and Reservists, in the Royal Navy, Royal Marines, British Army and Royal Air Force, veterans and military families – as well as veterans from the Merchant Navy.

Sir Andrew Gregory, CEO of SSAFA, said: “SSAFA is proud to present this poignant concert that will honour the men and women who lost their lives during the Second World War and also celebrate the freedom and safety that we enjoy today, thanks to our Armed Forces. It is our duty to keep the events of the past alive in our collective memory.

“By ensuring that future generations understand these matters, it will help ensure that such a conflict never happens again. We hope that the Nation takes a moment to reflect on the significance of this date, for it was a milestone that changed the course of history for the whole world.”

Craig Hassall, CEO of the Royal Albert Hall, said: “We are honoured to host this event exactly 75 years to the day since the guns fell silent at the end of the war in Europe. The Hall has a long and important history of uniting the country in support for those who serve and have served, and in remembrance of all those who have lost their lives in conflict.”

SSAFA Ambassador, Dame Vera Lynn, said: “VE Day meant an end to nearly six years of a war which cost the lives of millions. To be a SSAFA Patron on the 75th anniversary is of huge importance to me as we remember all those involved.”