A member of Armed Forces charity Help for Heroes’ case management team has won the national title of ‘Heropreneur of the Year’ in recognition of his work on mental health throughout the pandemic. 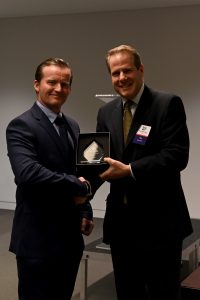 Paul Vicary, 51, works part-time for the Charity as a veteran liaison officer – in the Wales and Hereford team – in addition to being a co-founder and director of Hereford-based X-Calibre Mental Health (XCMH), which delivers mental health training and consultancy to organisations across the UK.

A veteran himself of 35 years’ military service, Vicary received the award at a ceremony in The Shard, London, and said: “I was completely shocked when my name was announced. Saving a life is by far a greater achievement than any money one can earn. Removing the stigma of mental health issues is the first step, and, during COVID when people’s mental health was being tested to the limits, we were able to make a real difference.

“I later received some feedback that highlighted we had saved lives through some of the mental health training we had delivered. Real lives and real people were benefitting from our courses.”

Heropreneurs, which was launched in 2009, directly supports the ambition of many current and former military personnel or their partners through one-to-one mentoring and hands-on guidance, given freely, by some of the country’s most successful business leaders.

The Heropreneurs Awards were established in 2018 to celebrate the success and entrepreneurial spirit of all members of the Armed Forces community, and the Heropreneur of the Year Award is the most prestigious honour at the annual event. It recognises an entrepreneur who has made a significant contribution to business and used their considerable skills and talents to help the extended military community.

The winner is selected by the Heropreneurs board of trustees and team from a shortlist drawn from the recommendations of expert judges across all the categories in the awards programme.

Heropreneurs’ chairman, Peter Mountford, said: “We are delighted to recognise Paul’s achievements by awarding him the Heropreneur of the Year Award for 2021. As with all our awards, where we recognise business success from the wider military community, the Heropreneur of the Year Award celebrates the contribution of a very special individual who has made exemplary progress in business and supported the military family.

“Paul has shown determination and great resolve, especially during the challenges of the past two years, and has grown X-Calibre Mental Health into a business that serves and supports members of the military community in a very tangible way. The course of people’s lives has been radically improved and changed for the better, thanks to the work of the organisation and Paul’s tenacity and commitment to the community. His passion and energy make him a very worthy winner of this year’s award.”

Vicary’s company works with organisations of all sizes, empowering employers and employees to better look after their mental health. The courses run by XCMH focus on issues such as stress management, drink and drugs, suicide intervention, and nutrition for good mental health.

The training courses and awareness campaigns result in lower rates of absenteeism, improved performance, a stronger culture within the workplace, and greater confidence and resilience in the employees.