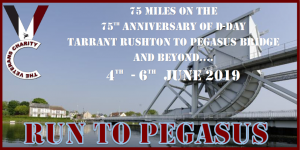 The Veterans Charity has launched a special event which will commemorate the 75th anniversary of D-Day and raise vital funds to support Veterans who face hardship and distress.

The event, titled ‘RUN TO PEGASUS’, will be held on 4-6th June 2019 and the charity invites people to register to participate as soon as possible to help with planning and preparation for the run, which the charity first staged in 2009 for the 65th anniversary.

Danny Greeno, Chief Executive of The Veterans Charity said “This was the first large scale event we held, and it helped us not only to raise the funds to create our much-admired memorial at Pegasus Bridge in Normandy but also enabled us to donate more than £150,000 to support Veterans in need. We have received many requests in the last 7 years to hold the event again and as the 75th anniversary is approaching, we felt it was the perfect time to hold the run once again.”

On the night of the 5th/6th June 1944, men of the 2nd Battalion the Oxfordshire and Buckinghamshire Light Infantry, known as “the 52nd”, took off from Tarrant Rushton Airfield in Dorset in six Horsa gliders and headed towards their objective; two vital bridges over the Caen Canal and River Orne by the village of Benouville. This coup de main operation was called “a suicide mission that might just work” by some senior officers but thanks to the training and skill of those involved, the men achieved their objective and seized both bridges in under ten minutes. No4 glider, carrying 22 platoon, was released in the wrong place and landed some ten miles away from their objective. Despite landing in the wrong location, the men successfully seized the bridge where they landed and then began to make their way towards Pegasus Bridge and the rest of the Battalion. Despite several sharp encounters with the enemy resulting in four men being killed and several wounded they eventually joined up with the rest of the 52nd near Ranville after 18 hours of marching, wading and fighting during which time they added various parachutists and an airman to their number.