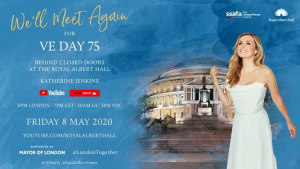 For the first time in its 150-year history, the world-famous Royal Albert Hall plays host to a very special Katherine Jenkins concert behind closed doors, set to boost the morale of millions of people worldwide.

The event will mark the VE Day 75th anniversary on Bank Holiday, Friday 8 May, while bringing together countless nations affected by the Coronavirus pandemic. International Mezzo Soprano Katherine Jenkins, the biggest selling classical artist of the century, will perform on the Royal Albert Hall stage to an empty auditorium. The half-hour concert will be streamed to audiences around the world via YouTube at 6pm BST and is the first performance of the #RoyalAlbertHome series to come from the Hall itself. It follows on from Katherine’s successful at home lockdown concerts which have amassed over 2 million streams to date.

This unique concert is made possible by funding from the Mayor of London, Sadiq Khan, as part of #LondonTogether, and will be introduced with a video message from the Mayor. #LondonTogether invites Londoners to highlight great examples of positive community action and gives much deserved appreciation for the work of our health and care staff, emergency services, key workers and volunteers.

The event is in support of the Royal Albert Hall’s fundraising appeal and SSAFA, the Armed Forces charity’s Emergency Response Fund.

Katherine says: “In London on VE Day 1945, over a million people celebrated Victory in Europe and the end of nearly six years of war. Crowds gathered en masse in Trafalgar Square and up the Mall to Buckingham Palace and whilst we may not be able to celebrate this year as we once did, it’s only right that we don’t allow the 75th anniversary of this historic day to be overshadowed. Having been part of the 60th and 70th events, I wanted to do something to help bring the nation and the world together in commemoration and celebration at this difficult time.
I’m excited that we can still come together, albeit virtually, for a tribute of wartime songs and musical memories from London’s most iconic concert venue. The Royal Albert Hall will be seen like never before – empty, isolated and yet still breathtakingly magnificent!”

In this, her 46th appearance at the Hall, Katherine Jenkins will sing wartime favourites including ‘The White Cliffs of Dover’ and ‘We’ll Meet Again’; the latter performed as a virtual duet with Dame Vera Lynn. The timeless song, featuring the lyrics, ‘I know we’ll meet again some sunny day’, epitomised the emotions of the war and brought people hope and a sense of togetherness. Today, they ring true for families around the world separated from loved ones at this time of crisis. The performance will close with a rendition of ‘Jerusalem’, one of Britain’s best-loved hymns.

Dame Vera Lynn says: “I’ll never forget how ‘We’ll Meet Again” meant so much to all those soldiers going off to war as well as with their families and sweethearts. Seventy-five years since the end of the war in Europe, the virus has given those lyrics a whole new meaning. I have found the nation’s renewed love for the song very moving. I hope this special duet lifts the spirits of our VE Day Veterans and all those separated from loved ones at this time.”

The concert will give the nation a moment to pay tribute to the fallen men and women of the Second World War and salute the country’s VE Day Veterans, many of whom are experiencing uncertainty and isolation. It is also our opportunity to thank the Armed Forces who, alongside the NHS and many others, are coming together to serve the country.

Watch the performance at 6pm, Friday 8 May at: www.royalalberthall.com/ve75

The Royal Albert Hall is currently closed for the first time since the Blitz, has no regular income to support staff or its Grade I-listed building. The venue is asking viewers to consider making a donation online or via text to donate by texting ALBERT to 70490 to donate £5. For more information go to www.royalalberthall.com/supportus.

The Royal Albert Hall event, ‘VE Day 75’, originally due to take place on 8 May 2020, hosted by Katherine Jenkins and streamed live to over 450 cinemas UK wide, is now postponed to Sunday 20 September 2020, due to the Government’s Coronavirus restrictions. More information at www.veday75.co.uk.

The Mayor of London, Sadiq Khan:

“I’m really proud to be able to support this one-off special concert at the Royal Albert Hall as part of the commemorations to mark the 75th anniversary of VE Day. Music unites us through times of hardship and this behind-closed-doors concert embodies the true British spirit of overcoming challenges and remembering those who served our great country and paid the ultimate price for our freedom.

“This year and every year, VE Day invites us to reflect on the immense contribution the men and women of our Armed Forces make to keep us safe. I hope audiences across London and around the world join together to enjoy this unique celebration and donate if they can to SSAFA’s Emergency Response Fund in honour of their incredible contribution to our country.”

“YouTube is proud to partner with The Mayor of London, the Royal Albert Hall and SSAFA to bring the wonder and beauty of Katherine Jenkins’ performance for ‘VE Day 75’ to life online for viewers across the UK and beyond. While we are committed to staying home and keeping our community safe, we are delighted to help people come together to recognise this pivotal moment in our history, honour our Armed Forces, and boost the spirit and morale of Britain.”

“We’re delighted to announce this very special behind-closed-doors performance from Katherine Jenkins as part of the Royal Albert Home series. With these shows, we wanted to do something to keep the venue’s spirit alive, to give audiences something to cheer, inspire or just distract them during this difficult time, and to encourage donations that will help us keep afloat. The Hall has been a place of celebration and commemoration for almost 150 years, and while it’s impossible for us to welcome audiences on this 75th anniversary of VE Day, we hope that this concert will bring people together as the nation reflects on one of its defining days. We’d like to thank everyone who has made this unique event possible.”

“Music has always had the power to unite and bring people together, and now more than ever we are seeing the ability it has to connect friends, families and loved ones around the world. At Decca Records, we are incredibly proud to support Katherine Jenkins, the Royal Albert Hall, SSAFA and everyone involved in the creation of this unique event.”

“During our new normal of social distancing, it is even more important that the Nation should come together in song to mark VE Day 75. This virtual reunion will honour both the victory that changed the course of history and also the men and women who served this country to achieve it – particularly those who made the ultimate sacrifice to protect our freedom.

“We can draw strength from their values, especially their courage and selflessness, during this new time of national threat and uncertainty. I hope that the Nation will take pride in celebrating those who served during the Second World War and, in doing so, will experience that sense of community and collective endeavour that will continue to overcome adversity.”