When Does SAS: Who Dares Wins Celebrity Version 2020 Start?

The start date for the latest celebrity edition of Channel 4’s hit TV series – SAS: Who Dares Wins – has been announced.

The series in which members of the public and in this case, celebrities, are put through their paces by former members of the Special Forces has been a major success and the new series will begin on Monday April 20 on Channel 4 at 9pm.

It was announced by one of the DS, former SBS operative, Jason Fox on his social media accounts. 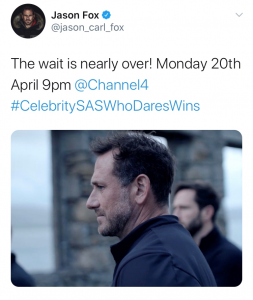 When does SAS Who Dares Win Celebrity 2020 start?

The full team of former special forces members are: Ant Middleton, Mark Billingham, Ollie Ollerton, Jason Fox and newcomer, Jamie (Jay) Morton, who has recently spoken to Pathfinder’s new health and fitness supplement magazine – Military Muscle – in an exclusive interview inside the May issue of Pathfinder.

Catch our previous interviews with two of the SAS DS Mark Billingham and Ollie Ollerton below.