156 Organisations Awarded For Their Support Towards The Armed Forces Community

More than 150 organisations have been recognised by the UK Government for their outstanding support towards the Armed Forces community. 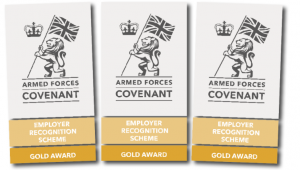 Representing the highest badge of honour, the Employer Recognition Scheme Gold Awards identifies businesses that employ and support those who serve, veterans and their families.

A total of 156 organisations have been recognised this year, the ninth year of the awards scheme.

Of the winners, 44% are either micro-organisations or small and medium sized enterprises, while 33% are public organisations. This demonstrates both the growth in numbers and the depth of supportive employers.

Councils, charities, blue light services, retail and insurance companies are among those that have been recognised.

Regardless of size, location or sector, employing members of the Armed Forces community is good for businesses.

These awards recognise the outstanding support for our Armed Forces from employers across the UK and I would like to thank and congratulate each and every one.

The Employer Recognition Scheme Gold Awards continues to grow in strength each year, with a current total of 643 holders. Organisations must reapply after five years in order to retain their Gold Award status.

To win an award from the Ministry of Defence, organisations must show that they provide 10 extra paid days leave for reservists and have supportive HR policies in place for veterans, reserves, Cadet Force adult volunteers and spouses and partners of those serving in the Armed Forces.

We’re thrilled to be recognised with the prestigious Employer Recognition Scheme Gold Award. Inclusivity is a key part of our culture at Admiral, and we’re proud to create an environment where everyone feels supported.

Our colleagues with Armed Forces connections have such a positive impact on our business, particularly through their impressive resilience and adaptability, and we’re committed to continue giving them the support they need.

Groundwork Greater Manchester are extremely proud and delighted to receive an Employer Recognition Scheme Gold Award from the Ministry of Defence. Our work with the Armed Forces Community, especially supporting veterans to gain new skills and employment, has become a cornerstone of the trust’s activity and this award is a reflection of the amazing outcomes and advocacy services our Veteran’s Employment Team deliver.

We are also fully committed as an organisation to supporting the Armed Forces veterans and reservists who are employed at Groundwork as we recognise the breadth of transferable skills, knowledge and experience they bring to the company as well as the service they have given to our country.