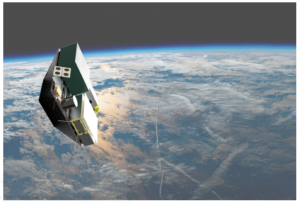 The Defence Science and Technology Laboratory (Dstl) have awarded a £9.5 million contract to In-Space Missions Ltd for the build of the Titania satellite, which will undertake vital research on the next-generation of communications technology.

To be launched in 2023 and approximately the size of a washing machine, the satellite will support the ‘Titania Operational Concept Demonstrator’ which is exploring the military utility of Low Earth Orbit (LEO) direct-to-earth free-space optical communications (FSOC).

As modern battlespace technology requires increasingly high bandwidth, FSOC has the potential to transform military communications with its ability to transfer large volumes of data, with a low risk of detection or interception.

The technology works by transmitting the data at high speeds via narrow laser beam between two very specific points. In this case Titania will communicate with ‘Puck’, Dstl’s new Optical Ground Station – carrying on the tradition of the UK naming space projects and satellites after Shakespearian characters.

The Titania space mission will accelerate the development and adoption of space-based optical communications, allowing our Armed Forces the ability to operate in an increasingly contested environment.

The Titania satellite will support the UK space sector and provide a solid foundation on which to conduct experimentation into FSOC and allow the science to be developed. We are delighted to be working with In-Space Missions on this highly innovative project.

With transfer speeds of multi-Gigabytes per second, the increased rate of data transfer provided by FSOC will enable faster military decision making, and when launched, Titania will focus on demonstrating the rapid transfer of Intelligence, Surveillance and Reconnaissance data.

The satellite will be built in the UK by Hampshire-based In-Space Missions, with the contract directly supporting 20 jobs at the company and in the UK supply chain. Forming an important part of developing the MOD’s space capability, the contract follows the recent launch of UK Space Command at RAF High Wycombe, which saw the headquarters of Defence space capabilities and operations officially ‘stood up’.

Following our stand-up as a Joint Command, the Titania satellite contract is the next exciting step for the UK in space.

It’s a brilliant example of the partnerships being developed and enhanced across the UK space enterprise, developing capabilities that not only enable military operations, but underpin countless activities essential to our way of life and the safety of our nation.

Supported by the £24 billion uplift announced by the Prime Minister last year, the programme reaffirms commitments outlined in the Defence Command Paper with a focus on developing space capabilities and operating in this domain. The construction of the Titania satellite is part of the MOD’s investment of over £1.4 billion into next-generation technology in the Defence Space Portfolio across the next 10 years.

The contract to build the satellite has been awarded through the Serapis Lot 2 commercial framework, run by Dstl in collaboration with BAE Systems. The framework aims to reach non-traditional defence suppliers, small and medium-sized enterprises, and academia to develop new capabilities with the space domain.