A Century On – Families Attend Funeral 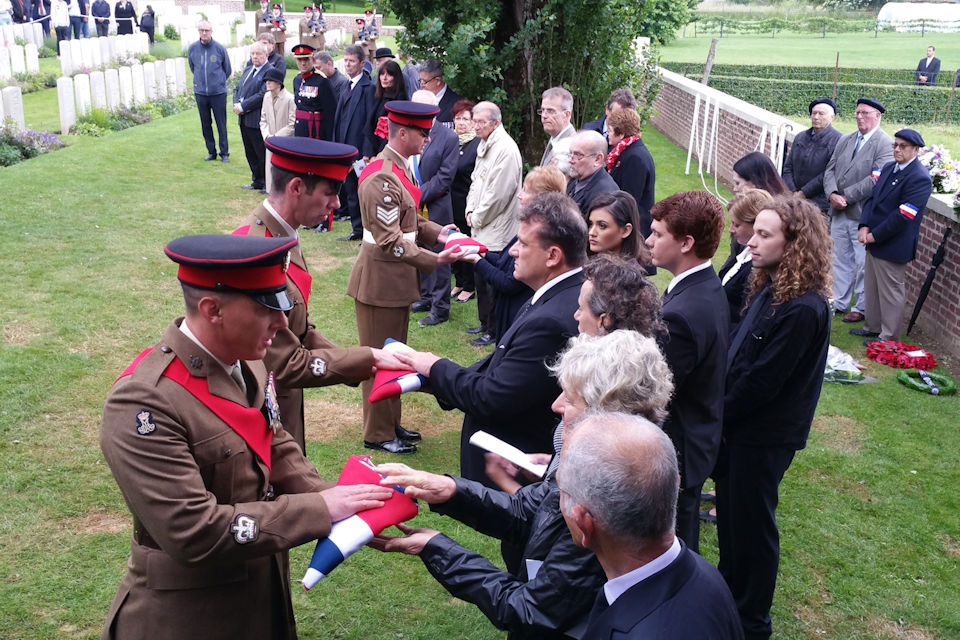 Margot Bains, Paul Mead and Chris Mead attended a moving service for the 2 soldiers of the 23rd (County of London) Battalion, and a third Unknown Soldier who served in the same Regiment, at the Commonwealth War Graves Commission (CWGC) Hermies Hill British Cemetery in France.

The service was conducted by the Reverend Martin Wainwright CF, reserve Chaplain to the 4th Battalion, The Princess of Wales’ Royal Regiment, whose current serving members formed the bearer parties for their 3 former comrades. The MOD’s Joint Casualty and Compassionate Centre (JCCC) – also known as the ‘MOD War Detectives’ – organised the commemoration and funeral with full military honours, after they successfully identified Pte’s Wallington and Mead and traced their surviving relatives.

The CWGC have now provided 3 new headstones at the Hermies Hill British Cemetery bearing the names of Pte Wallington, Pte Mead and an Unknown Soldier of the 23rd (County of London) Battalion.

Paul Bird, CWGC Recovery Officer said: “It was a great honour to recover these 3 casualties from the battlefield when they were discovered near Anneux in 2016. It is a privilege to be here today to see them laid to rest in the Commonwealth War Graves Commission’s Hermies Hill British Cemetery alongside their comrades. The Commonwealth War Graves Commission will proudly mark and care for their graves, together with all of those who served and fell, in perpetuity.”