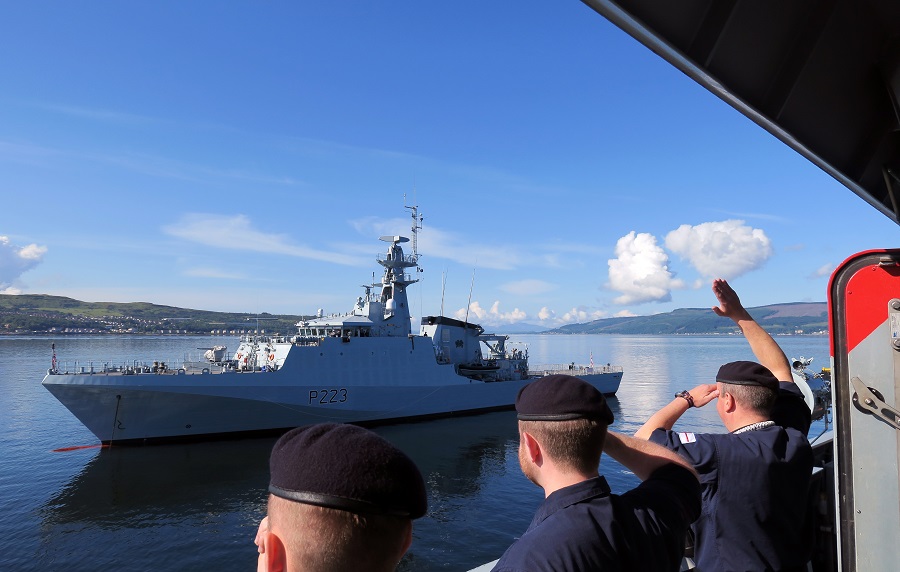 HMS Forth overcame fires, floods and fast attack craft over three intensive weeks in western Scotland – the final hurdle the Portsmouth-based warship had to overcome before being declared fit to deploy. As Forth becomes operational, her younger sister HMS Trent has returned to Glasgow after a fortnight of successfully being put through her paces in the Firth of Clyde. And the second of the £116m warships, HMS Medway is about to make her debut in Portsmouth.

The five ships – HMS Tamar (launched) and Spey (nearing completion) complete the quintet – are bigger, faster, more heavily armed, able to land and refuel Wildcat and Merlin helicopters, carry more than 50 troops on missions if needed, and can stay at sea a fortnight longer than the first generation of River-class ships which were built 15 years ago and are still in service.

After patrols around the UK, Forth is due to be sent to the Falklands at the end of this year to replace HMS Clyde as the islands’ permanent naval guardian while the aim is to operate her younger sisters from ports and bases around the globe to provide a constant Royal Navy presence in regions such as the Mediterranean, Caribbean and Far East.

Forth completed an intensive three-week spell of Operational Sea Training – the Royal Navy’s equivalent to ‘pre-season training’; every British warship has to pass the gruelling assessment before being sent on front-line operations.

Instructors test the ability of a ship and her sailors/Royal Marines to deal with every eventuality on board: fires, engine breakdowns, running aground, missile and bomb damage, fighting off enemy aircraft, refuelling on the go and providing humanitarian aid after a natural disaster. The training culminated in a powerful display of gunfire laid down by Forth against ‘enemy’ forces on the ranges of western Scotland.

Lieutenant Matthew McGinlay, Forth’s First Lieutenant and one of the longest-serving crew members, said: “Operational Sea Training is always a difficult test which has been made slightly more challenging by the fact we are the first of this class of ship to complete it. The training we’ve received is second to none and has put us in a strong position to deploy and conduct operations anywhere in the world.”