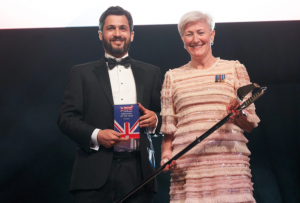 Amazon’s commitment to recruiting and retaining former military personnel in recognition of the value military skills and training add to their business has been honoured with the Officers’ Association (OA) Employerof the Year award.
Amazon employs hundreds of former military personnel and spouses throughout the UK, having recognised the impact hiring military-trained veterans deliver to their business.
Since engaging with the OA and other military recruitment organisations, Amazon has established a highly successful military program, that aids talent acquisition, career progression and community engagement for veterans, reservists and military spouses. As a result, last year, Amazon recruited over 100 veterans across different posts nationwide.
Founded as a military charity in 1920, the OA supports officers and reservists as they transition into civilian employment. It awards the OA Employer Recognition Award every year to an employer who recognises and utilises the transferable skills and qualities of the officer corps as part of their overall recruitment strategy. This year the OA has decided to honour Amazon for its innovative ways of engaging with veterans and reservists, its commitment to recruiting them and its role as a job creator within the e-commerce and digital streaming sectors.
Amazon’s Senior Program Manager for Global Military Affairs, Gillian Russell, accepted the award, alongside Yonatan Gal, Director of Operations UK.  The former Royal Navy officer said: “Amazon strives to be earth’s most customer-centric company. We actively seek leaders who can invent, think big, have a bias for action, and deliver results on behalf of our customers. These principles look very familiar to those who have served in the British military, and we find that their experience leading people is invaluable in our fast-paced work environment.”
The award presentation took place at the Ex-Forces in Business Awards dinner in London at the O2 Arena. The purpose of the event is to celebrate the links between military values and business excellence. The event was attended by over 500 people whilst observing social distancing guidelines and raised £32,586 for the Armed Forces charity SSAFA.
Lee Holloway, CEO of the Officers’ Association, said:
“The OA Employer of the Year Award is our acknowledgement to Amazon for their ongoing and high-profile commitment to recruit from one of the most highly trained and skilled talent pools in the UK. British business, no matter their size, can benefit from recruiting former military personnel and Amazon’s success in doing so absolutely demonstrates the difference former military personnel can make to their workforce and ultimately their business.”