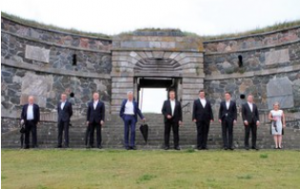 JEF Ministers gathered in Helsinki, Finland today to set the roadmap from which the JEF’s 10 northern European nations will evolve to tackle shared threats.

The JEF is a multinational force made up of 10 like-minded, northern European nations; the UK – as Framework Nation – together with Denmark, Estonia, Finland, Iceland, Latvia, Lithuania, the Netherlands, Norway and Sweden.

Today ministers also signed a detailed military directive which will provide the necessary operational and logistical guidance to enable the JEF to deploy quickly and effectively in response to joint threats to global security.

Since becoming fully operational in 2018, the JEF has continued to adapt to address modern security challenges, including the increasing number that are appearing below the threshold of conflict.

This directive will provide the overarching policy framework within which the JEF can evolve as a concept and operate as a rapidly deployable force to meet the reality of these challenges.

In an increasingly anxious neighbourhood like-minded partners must show solidarity.

The Joint Expeditionary Force exemplifies partnership in action, as a unique coalition of capable and willing neighbours ready to operate in every domain and respond to crises throughout the region.

Today’s meeting provided a platform for fruitful discussion between ministers and officials and allowed them to explore how its members could use multiple government and military levers during a sub-threshold crisis scenario, with these sorts of threats becoming more prevalent in the JEF’s area of interest.

In a more uncertain, more competitive age, Mr Heappey reaffirmed to the JEF nations that the UK will continue to make a decisive contribution to global security, following the Defence budget being boosted by £24bn and the Defence Command Paper outlining the vision for transforming our Armed Forces.

Following maritime integration activity in the Baltic Sea in March, the JEF nations will put this adaptation into practice later this year for Ex JOINT PROTECTOR 21.

What is the JEF?

The JEF is a multinational force made up of 10 like-minded, northern European nations; the UK – as Framework Nation – together with Denmark, Estonia, Finland, Iceland, Latvia, Lithuania, the Netherlands, Norway and Sweden.

The nations all share a commitment to democracy, human rights and the rule of law as well as a long history of operating together. We also share a determination to global and regional peace and maintaining the security of northern Europe.

The JEF is able to operate wherever in the world any two of its members choose to deploy together. Particular focus is on the High North, the North Atlantic and the Baltic regions, where the JEF can complement national as well as NATO’s deterrence posture in the region. It is designed to be as flexible as possible and has utility across a broad spectrum of operational activities, including humanitarian assistance and Defence diplomacy.