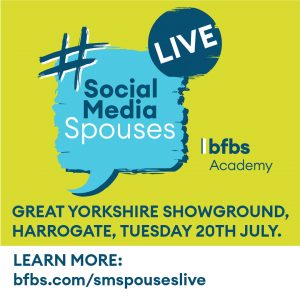 Today BFBS announces that tickets are available for SMSpouses Live – the UK’s only networking event for military spouses and partners looking to further their knowledge and skills in social media.

The exclusive event will be taking place on Tuesday 20th July at the Great Yorkshire Showground in Harrogate from 10am until 3pm UKT.

SMSpouses Live comes from the team behind #SMSpouses, an online course now in its third year, designed to addresses a real need amongst military spouses and partners to obtain the skills they need to find flexible and interesting work that fits around military and family life. It offers detailed training on how to use social media to grow their business, or to find a career in social media.

Since its launch in 2019, the course has received over 600 applications, and has just over 1,500 members in the Facebook support group.

Jackie Lerm, Head of Social Media said: “After what’s been an especially tough year, we’re so excited to bring the community together again. Supporting military spouses and partners is at the core of what we do. We’re so happy to be able to give them an opportunity to network, learn new skills and make new connections.”

Additional workshops from the team behind Social Media Spouses will include editing videos on your smartphone, creating engaging Instagram stories, and how to plan any creative digital campaign in 20 minutes.

Several military spouses and partners who have launched businesses will be showcasing and selling their wares at the event. There will also be a magician on hand to provide some light entertainment.

Tickets are £5, with all proceeds* going to the BFBS Big Salute.