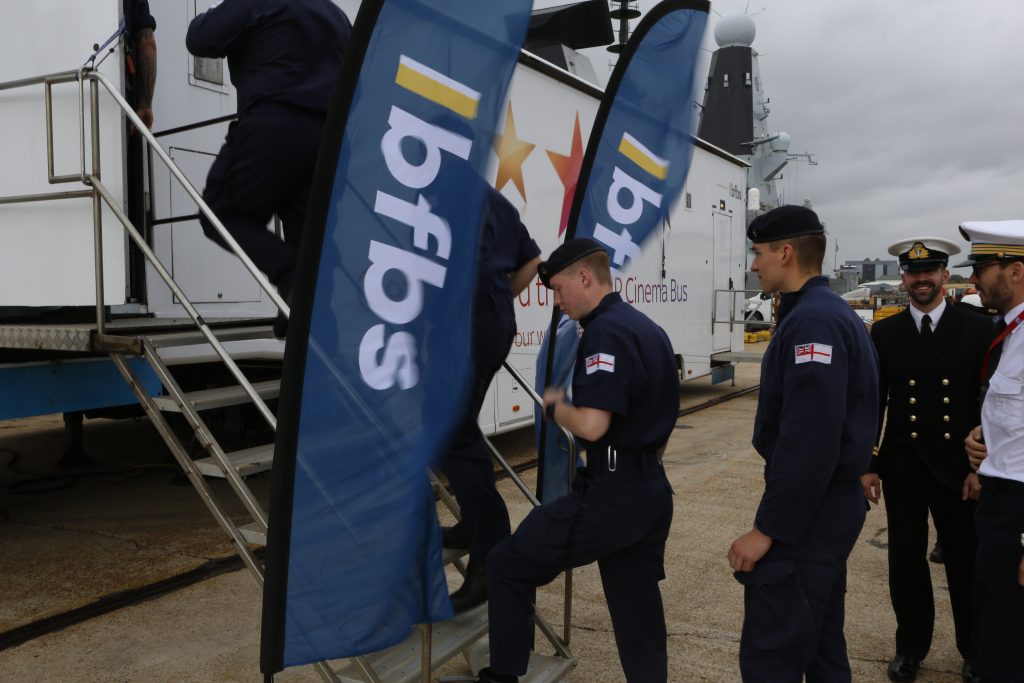 This week, BFBS has treated troops and their families around the country to screenings of the new James Bond film ‘No Time To Die’.

On Thursday and Friday, BFBS Cinemas’ Movie Machine travelled to Portsmouth and parked up alongside HMS DRAGON. The 80-seater mobile cinema, which is contained within an HGV, pulled up alongside the jetty allowing the ship’s company the opportunity to go directly from onboard ship to onboard the BFBS Movie Machine. The Type 45 Destroyer appears in the latest Bond film with filming taking place before the onset of the pandemic.

On Thursday BFBS Cinemas also partnered with DMRC Stanford Hall to host two free screening for patients. The hospital declared it ‘James Bond Day’ to boost morale, including a brand-new Aston Martin DB11 and DB9 on display outside the venue. Staff were encouraged to dress in ‘James Bond-esque’ clothing to mark the occasion and the day provided much needed social interaction for all staff following a significant period of lockdown as well as providing a milestone for the ongoing rehabilitation journey of patients attending DMRC.

Jennifer Holdford, BFBS Cinemas Operations Manager, said: “This is the first time our mobile cinema has been out on the road since the start of the pandemic, and we are thrilled that we are able to support the Navy personnel on board HMS DRAGON with a special visit. Universal Pictures are always incredibly supportive of the work BFBS do in supporting the morale and welfare of our Armed Forces and we are delighted to bring this highly anticipated release to our audiences across the world.”

Kerrie Heath, Unit Training Officer & Regional Training Lead (RTL), Defence Medical Rehabilitation Centre, Stanford Hall said: “The cinema provision at DMRC Stanford Hall is financially supported by the DMRC Benevolent Fund. Their support allows us to run this important welfare facility all year round with film provision usually via the BFBS’ Cinelink service. Thank you to the DMRC Benevolent Fund who will also be supplying all attendees to our No Time to Die event with drinks and popcorn to add to the cinema experience and staffed by volunteers from our civilian and military personnel on site.”

Currently, BFBS Cinemas across the country, including Northern Ireland, Cyprus and the Falkland Islands are screening the film for troops and their families to enjoy.