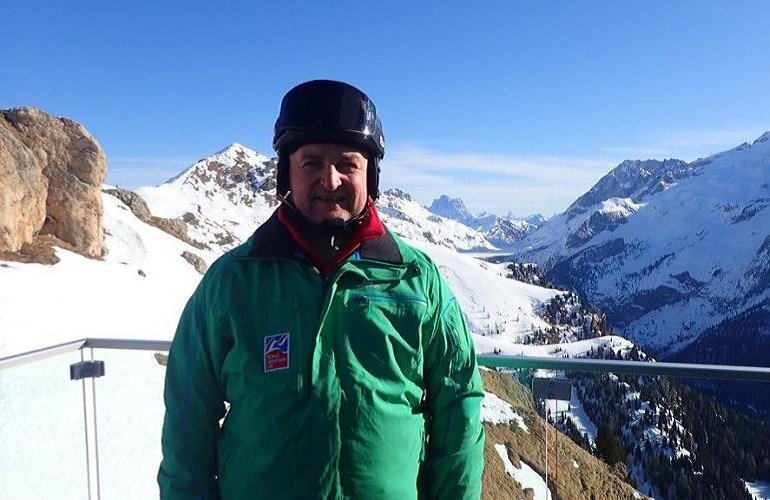 A blind veteran from Greater Manchester has been skiing for the first time in 20 years thanks to Blind Veterans UK, the national charity for vision-impaired ex-Service men and women…

Steven Dixon, 41 and from Ashton-Under-Lyne, went to Canazei in the Italian Dolomites last week along with 22 other blind veterans as part of the charity’s annual ski trip. He says: “I went skiing as a teenager but I haven’t been since losing my sight. It was wonderful to get the opportunity to do it again. Skiing is a bit like riding a bike – once you learn all the manoeuvers you really get back into it”.

Steven joined the Infantry in 1996. He was in the 1st Battalion King’s Regiment, serving in Cyprus, Northern Ireland and Kuwait, before being discharged in 2001. He lost his sight when he developed amblyopia in his right eye. Fortunately, Steven found Blind Veterans UK and started to receive support from the charity in February 2019.

He regularly attends the charity’s training and rehabilitation centre in Brighton, where he has completed IT training courses and taken part in fitness weeks. Steven says: “I knew a few of the veterans who were going on the trip beforehand through meeting them at the fitness weeks. I’m running the Manchester 10k for the charity in May so I will attending one of their fitness weeks beforehand to help me with my training”.

The charity has also provided Steven with technology to help him with everyday activities. He says: “They have given me a CCTV scanner so that I’m able to read letters which is fantastic”.

After returning from the ski trip, Steven said: “The trip was perfect! I had a wonderful time and will definitely be going again next year! I have so much gratitude for the charity, they have done so much for me.”