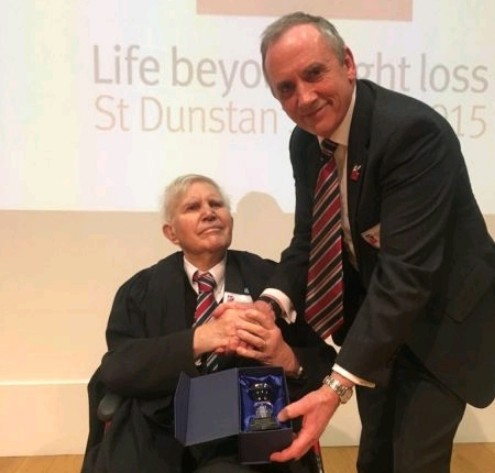 Dr Zbigniew Pełczyński OBE (Zbig) has been presented with an Honorary Fellowship for research and innovation by Blind Veterans UK at a prestigious ceremony held at Pembroke College, Oxford…

Blind Veterans UK’s Expert Advisory Group voted unanimously to induct Zbig as the first Honorary Fellow because of his outstanding contributions to research and innovation within welfare and social sciences. As an Honorary Fellow he will contribute to the development of research relevant to blind veterans and wider society.

Zbig was born in Grodzisk Mazowiecki, Poland, and fought in the 1944 Warsaw Uprising where he was taken prisoner by the Germans. After liberation from a camp near Bremen, he joined the Polish first armoured division under British command, and because of this was able to receive a grant to study in Britain.

After completing his DPhil thesis at Oxford University on Hegel’s minor political works in 1956, he was elected a Fellow of Pembroke College Oxford and lecturer in politics. His subsequent publications made him a world authority on Hegel and resulted in Visiting Professorships and senior scholarships at six foreign universities, ranging from Harvard to Jerusalem, Australia and Japan.

After 1956, Zbig made regular visits to Poland and was instrumental in developing several programmes for the education of students from communist Europe at Oxford. In 1982, he established a scholarship program for Polish students at Oxford.