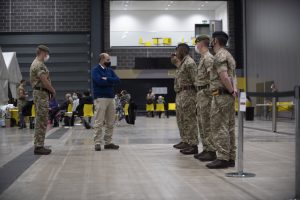 Following reports in various media outlets earlier in the week that the British Army training area, BATUS in Canada would close to make way for a new location in the middle east, the Defence Secretary has confirmed it will remain open, but will see change.

Speaking to Forces News on the matter, Ben Wallace replied “”BATUS is not being closed. Of course, we’ll change what we do there because some of those forces we might use elsewhere but no we’re not closing BATUS.”

Asked if there was more of a focus on the middle east in the future, Mr Wallace said: “We are being present where it matters, and the Middle East matters.

Earlier in the week, it had been reported that was BATUS was to close with focus on Oman. Although middle east training locations have not been ruled out, Mr. Wallace reiterated BATUS will remain open…

“The Middle East is one of those parts of the world, Oman and Qatar, for example, would be one of those areas.

Canada is one of the UK’s oldest and closest allies. Contrary to reports today, we are not closing BATUS. It will continue to be a vital training base for the British Army.”

BATUS has provided a training environment for the British Army since 1972.