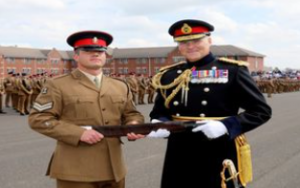 A British Army soldier who turned Santa to save Christmas for many families in lockdown has been awarded the Captain Sir Tom Moore trophy for his charitable efforts.

Corporal Robert Chamberlain received the newly created award for going above and beyond after delivering Christmas presents to the families of strangers who would otherwise have missed out on receiving them.

Robert was in a predicament leading up to Christmas as lockdown restrictions meant he was in Harrogate and his children’s presents were stuck with family in Kent. He then realised that there would be other people in similar situation, so he researched ways to overcome this problem.

He realised that unless you were an official delivery driver you were not able to travel, so he researched how to set up his own business as a deliver driver and then did so, purchasing business insurance, hiring a van and going above the health and safety requirements for delivery drivers.

Robert used his own time and petrol during his leave from the Army Foundation College, Harrogate to drive hundreds of miles around the UK delivering presents to lots of different families. He set up his own delivery business, a Just Giving page and social media page to track his progress and garnered support to raise over a thousand pounds for the Trussell Trust.

Forty-one hours of delivery driving, hundreds of miles have been covered, £1,125 has been raised for the Trussell Trust, I have drunk eight cans of energy drinks and seen lots of smiles from families, now I have finally completed all my Christmas deliveries.

His role at the Army Foundation College is that of a Section Commander who delivers the basic military training and leadership development to Junior Soldiers, preparing them for a career in the British Army. He received the trophy in front of the Junior Soldiers he had trained at their graduation parade.

He has worked at the Army Foundation College for over 18 months and has consistently been an excellent role model to all of the Junior Soldiers he has trained.

The next Capt Sir Tom Trophy will be awarded at the next graduation parade in February 2022.