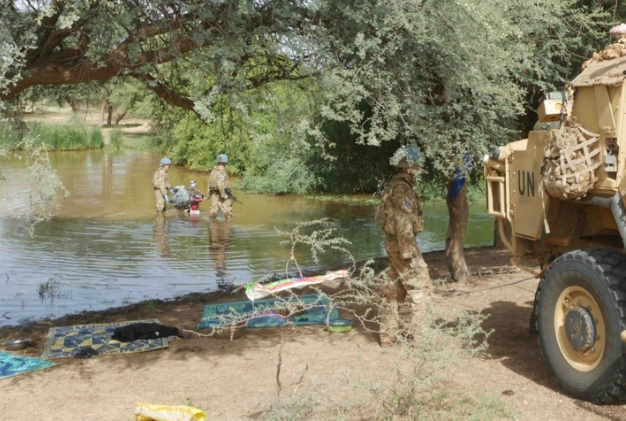 During a 17-day operation in September, soldiers from the UK’s Long Range Reconnaissance Group (LRRG) disrupted suspected violent extremists from groups believed to include the Islamic State in the Greater Sahara (ISGS), seizing weapons and securing villages in line with the UN’s mandate to protect civilians.

During one encounter, soldiers from the Queen’s Dragoon Guards came across three suspected ISGS militants who ditched items as they fled the scene. One of the three men was detained after driving his motorbike into a body of water in a bid to escape. During a search of the area, the soldiers seized two motorcycles, a rocket-propelled grenade (RPG) launcher with rockets, radios and combat clothing.

Days later, soldiers from the same regiment happened across two armed males, detaining them after they attempted to flee when they were approached. The soldiers seized two AK47 rifles, ammunition, radios and other military equipment.

All three detentions happened in an area where ISGS fighters are known to operate, although part of the peacekeepers’ role in Mali involves approaching members of legal militias who have signed up to the Algiers Peace Agreement to make sure they are complying with its terms.

These operations are yet another example of how UK peacekeepers are making a real difference to the UN mission to protect civilians in Mali.

Disrupting armed groups and taking valuable weapons and ammunition out of the hands of terrorists makes communities safer, while our presence in the region helps the UN mission to understand and counter threats to the local population.

Both encounters happened under Operation Makara 2, a UN operation to stabilise population areas around Ansongo and deter or disrupt terrorist groups in order to protect and reassure the local population. The operation was ordered after dozens of villagers were massacred by suspected extremists in the area in August in attacks which the LRRG helped a UN Human Rights team to investigate.

The LRRG are not only a force that finds, but a force that acts. These detentions, along with the seizure of these suspected ISGS weapons and equipment, show that a robust approach to peacekeeping helps protect the Malian people.

Key to successes like this are putting out patrols for long periods that persist in place. By returning to the sites of August’s cowardly attacks we built up a picture of how jihadist groups operate that has allowed us to take action like this against them.

The UK Task Group provides the UN with a specialised long-range reconnaissance capability, conducting patrols in remote areas. British soldiers gather intelligence and engage with the local population to help the UN mission understand and respond to threats and fulfil its mandate to protect civilians.

During Operation MAKARA 2, the Task Group also provided assistance to the UN’s civil pillar, enabling them to visit projects and identify future opportunities for engagement.

The Sahel is one of Africa’s poorest and most fragile regions, with more than 15 million people requiring humanitarian assistance and increasing insecurity, including terrorist violence and conflict.

The UK is providing targeted assistance through defence, diplomatic and development expertise, including supporting the UN with critical capabilities like the reconnaissance force.