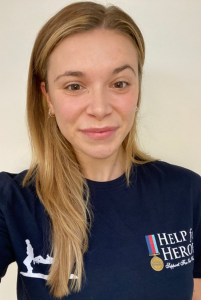 Eight years on from being given two weeks to live, Kitty Harrison is looking to help Armed Forces veterans be the best person they can be by using her own life experiences in her new role for Help for Heroes, in Bristol and Somerset.

Harrison, who lives in Glastonbury, has taken up the position of Regional Sports, Activity and Fellowship Practitioner with the Charity, and can use as an exemplar her own teenage years spent in hospital before learning to walk again and then successfully trekking up Indonesia’s Mt Rinjani.

The ebullient 26-year-old moves to the Charity from roles with the Paralympics High Performance Sport Faculty, in Bisham, and the Elite Cricket Performance Academy, in Isleworth, where she has coached, encouraged and managed athletes during the last four years.

She brings with her qualifications in numerous disciplines, including strength and conditioning (BSc Hons), sports nutrition, personal training, event management and co-ordination, and disability coaching – and, as a classically trained dancer, she’s even certified to teach dance.

Her wealth of knowledge comes from her own determination not to fall by life’s wayside following three years in hospital with an undiagnosed condition from the age of 15.

She explained: “I was in hospital for three years, so, to keep my brain active, I threw myself into everything I could do. I had organ failure; I was tube fed and my body just rejected everything. I was given two weeks to live when I was 18, because I was unable to digest any food.

“Cognitively, my brain wasn’t functioning very well; I couldn’t string a sentence together and I developed a speech impediment. I was in a wheelchair, and everything just shut down on me. But then they changed my tube-feed, and I was suddenly able to digest food a bit better. And I’m here to tell the tale.

“When I was told I wouldn’t be able to walk again, my entire focus turned to health, wellness, mental and physical health and I changed my whole pathway from that point, hence the interest in nutrition. I was working with physios every day and had to learn how to stand again and support myself, so I got into strength and conditioning; and now, all I want, is to be outside and be active all the time, because, in my head, it’s still a miracle that I can do it.”

That gained knowledge – and surviving her own brush with death – totally changed her career ideals. Having originally wanted to study law and English literature, she became totally devoted to helping other people.

She added: “Everything I do now is about trying to help people, to bridge the gap and play my part in helping them feel healthier and happier, however that may look. I know what it’s like to be injured or have physical or psychological issues which may feel like it’s stopping you from being the person you want to be. I want to use my experiences, and what I’ve learned along the way, to help other people.

“What I’m really looking forward to is being able to watch people grow as individuals. There are cases where you just see somebody flourish, whatever that may be for them – whether it’s being able to sleep better, or finally being able to leave the house. It’s about allowing people the space to progress at their rate and find what it is that makes them tick.

“I want to offer lots of different pathways to people to enable them to find their place within their community and discover something that makes them feel good about themselves, whether that’s through sport, creative activities or just meeting a good group of people they know they can connect with.”

And, if the veterans she’s working with need inspiration they could do worse than look at the young lady right in front of them. From seemingly facing a life in a wheelchair she refused to be beaten, and, in 2019, successfully trekked an active volcano in Lombok: Mt Rinjani.

She smiled: “It was part of my crazy ‘I Can Walk!’ year … As soon as I was given the all-clear, I booked a flight to Thailand on my own. I was held hostage in Thailand for a bit, which was awful, as my credit card was stolen and my funds were drained. But then I met a great group of people in Bali who were going to trek the mountain, so I thought ‘OK, I’ll do that’.

“I rocked up and they were all there with their walking boots, poles, and rucksacks and I was in shorts and trainers. But I did it, it was amazing. Although I was feeling better, I probably shouldn’t have been hiking the mountain – but it just made me feel so alive. However, I do wish I could go back and be better prepared for it,” she laughed.

If she can impart some of that enthusiasm, drive and desire in her new role, the veterans of Bristol and Somerset, will have a valuable ally alongside them on their journey to recovery.