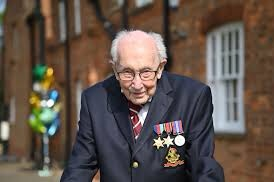 Captain Tom Moore, the 99-year old veteran who vowed to walk 100 laps of his garden before his 100th birthday on April 30, initially to raise £1,000, says the public’s reaction to his fundraising efforts has given him a fresh “burst of life”.

The World War 2 veteran has vowed to keep walking laps of his garden as long as the donations keep coming and his fund has now passed an incredible £26M for NHS charities to assist them during the coronavirus outbreak.

As if that was not enough, his charity single – a version of “You’ll Never Walk Alone” with Michael Ball – has now topped the charts on iTunes.

Captain Moore was speaking to BBC Radio 2 today and said the amount raised by the public was “amazing”, whilst his daughter, Hannah Ingram-Moore added the public had given him a “new purpose”.

Captain Tom also laughed at the idea of receiving a Knighthood, but said the idea was lovely.

“I wouldn’t put too much money on Sir Thomas, the idea is lovely, but don’t bank on it” Captain Tom said.

Captain Tom has now been asked to open the Nightingale Hospital in Yorkshire via video link.

You can still donate to Tom’s fundraising page here.