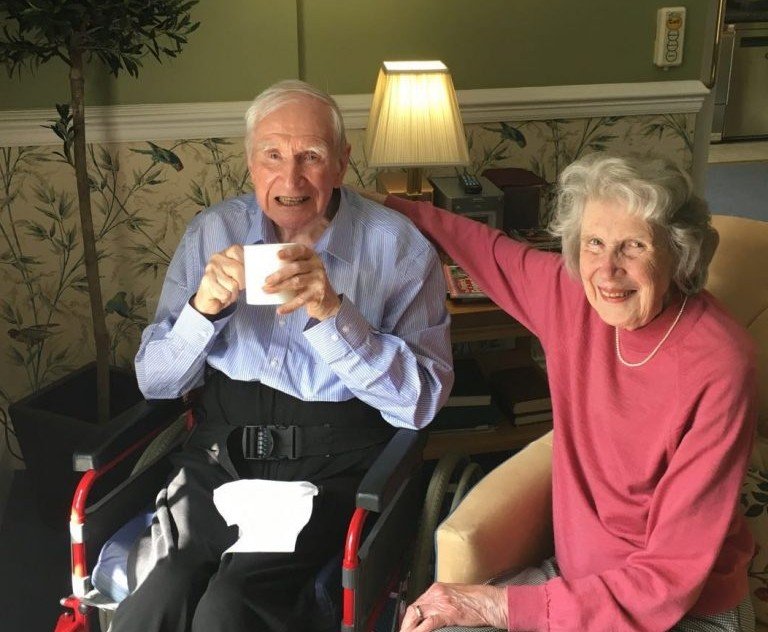 Julia Annandale’s father Donald lived the final nine months of his life at the Surbiton Home, and her mother Joy is now a resident there too. She said it was a “miracle” watching her father “laugh again” during his time at Royal Star & Garter.

She is also grateful that her mother, who is living with dementia, is now benefitting from the same loving, person-centred care. Julia, from Basingstoke, will run the 13-mile route through the capital with son Will, from Eltham, London, on 13th October.

Donald, an Army veteran who served in the D-Day landings, was living with Parkinson’s disease when he moved into the Home in Upper Brighton Road in July 2016. He and his family had been traumatised by a “ghastly” respite care experience at another care home shortly before. The family were “desperate” before he was assessed by Royal Star & Garter and relieved when he moved in soon after.

Julia said: “His time in Surbiton brought back joy and interest in his life. We never thought such a thing was possible. It was a miracle to the whole family to see him smiling, playing skittles, going to lectures. It was an amazing last nine months. He started to laugh again and that was huge for us all.”

Joy moved into the Home in May 2018. Julia continued: “I know she feels safe. She’s always telling me how kind everybody is, and its real kindness and real friendship. She has never once been treated with anything but respect and professionalism.

“She’s treated as the person she really is, and not the poor old lady who’s living with dementia. It’s enormously comforting to the family. Royal Star & Garter offers residents the chance to embrace life again. It’s amazing what they do, and we owe a massive debt of gratitude.”

To support Julia and Will, visit their fundraising page here.