World Mental Health Day 2019: Depression Is Not A Dirty Word! 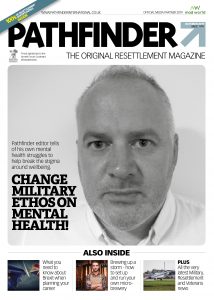 Pathfinder editor, Mal Robinson discusses his own military resettlement journey and mental health experiences for World Mental Health Day on October 10 as featured in the October issue of Pathfinder, which you can read for free here.

“I can feel the barrel of the rifle pointing at me around 200 yards away. The weapon is there for my safety, but it is pointing at me at the moment, until I am identified as a non-threat.  Yet still the barrel could well be resting against my skull, such is feeling of intensity in this situation.

I can’t help but think about the consequences should the Belgian soldier manning the entry gate, along with several of his comrades, accidentally discharge the round sat loaded and aimed at me. It was always a wave of relief when we had concluded the security checks and I was allowed to enter inside Kabul International Airport from outside in what literally was “no-man’s land”.

It is one of many scenarios to have dogged my mind in the years since, both consciously and thoughts and memories that have been itemised in my brain, but not necessarily processed. There have been a number of “what ifs” and close shaves in my time in both the RAF and then civilian roles abroad.