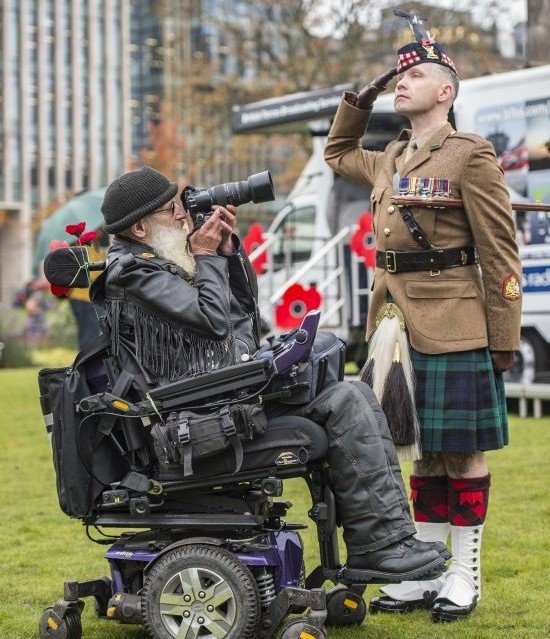 It may have been a typically dreich Scottish day, but the show most certainly went on as the seventh annual Edinburgh Poppy Day once again captured the city’s imagination…

During five fun-packed hours of live music and entertainment, hundreds of passers-by and visitors to the city dug deep to put money in the tins of the scores of volunteer collectors dotted around Edinburgh to help raise funds to support the country’s Armed Forces community.

The day’s concert and roadshow was hosted by Forces Radio BFBS Scotland, and this year’s performers included star of ITV’s The Voice and the Legion Scotland sweetheart Amy Hawthorn. Amy was joined on stage by Laura Connolly, Megan Adams, Richard Kerr, Alan Brydon and Stuart and Fraser Mclean, among others, who all ensured that all thoughts of the wet weather were banished.

There was also music from the 3 SCOTS The Black Watch Pipes and Drums as well as the presence of historic military vehicles for visitors to explore and learn about. Located at Castle Street was ‘Bud’, which is Poppyscotland’s 18-tonne custom-built truck that is travelling the length and breadth of the country to teach communities across Scotland about the importance of remembrance and the heritage of the poppy.

Gordon Michie, the Head of Fundraising at Poppyscotland, said: “Rain? What rain! Yes, it was damp, but there was no dampening of spirits as the music played on and a sea of happy faces enjoyed the endless entertainment before so many of them kindly donated to Poppyscotland.

“I want to thank all who took part today, whether that was the performers who gave of their time so generously, or the public who turned out to donate to the cause. Edinburgh Poppy Day is one of the pivotal days in the period of Remembrance and it’s a special occasion in which we can let the Armed Forces community know that we are behind them. Always.”

Among the many collectors out on the streets was Melanie Spencer who was part of the team from Virgin Money. She was ably assisted on the day by her daughters Madeleine and Amelia. Melanie’s great-grandfather and great uncle fought in WW1, while her grandfather served in Burma during WW2 and her grandmother worked in a factory putting ball bearings in bombs that would be dropped by the RAF.

She said: “I think it is really important for the children to be socially responsible, so that’s why they are along with me today. They are really enjoying the day and meeting a lot of lovely people. Earlier on, they got a chance to get on board the Bud truck, so they are now getting a better understanding of what the poppy and remembrance all means and why the need to collect.”