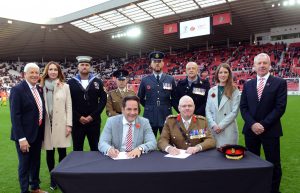 Sunderland AFC and its official charity, Foundation of Light, have been recognised for their commitment to supporting members of the armed forces, veterans and their families.

The Club and the Foundation were honoured to have become the 300th Armed Forces Covenant signatories in the North East, joining over 4,200 nationally supportive organisations.

The Armed Forces Covenant provides an opportunity for organisations to demonstrate their support for Armed Forces communities in the region, ensuring that those who serve or who have served in the Armed Forces, and their families, are treated fairly. Those who sign the Covenant aim to support the forces through services, policy and projects.

Sunderland AFC and Foundation of Light are also aiming to be the first English football club and charity to achieve the Defence Employer Recognition Scheme Gold Award by 2021.

The Covenant was officially signed in two ceremonies, the first on November 01, led by Commodore Phil Waterhouse at the George Washington Hotel. The second took place pitchside prior to Sunderland AFC’s official Remembrance game on November 02, in the company of Colonel Neil Blenkinsop, Commander Logistic Support 1 UK Division. 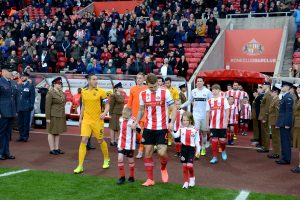 Speaking about the signing of the Covenant, Sunderland AFC chairman, Stewart Donald, said: “There is a very strong bond between our football club and the military.  We know that the North East is a hugely important partner for the Armed Forces, and Sunderland has a proud history of support. The signing of the Covenant cements our ongoing commitment to helping serving personnel, veterans and their families”.