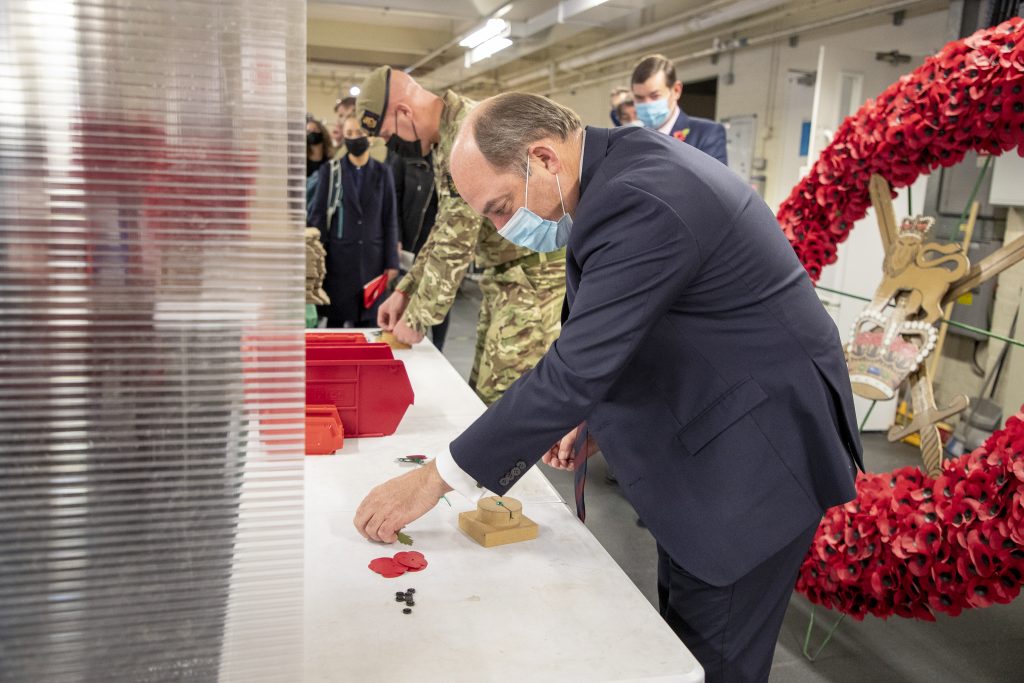 The Secretary of State for Defence, The Rt Hon Ben Wallace MP, visited the Poppy Factory in London, Richmond.

Secretary of State for Defence Ben Wallace has urged members of the Armed Forces to support The Royal British Legion’s Poppy Appeal despite changes to the National Service of Remembrance.

The open letter to the Armed Forces, signed by the Defence Secretary, recognises the huge role the Armed Forces play in selling poppies and collecting donations for the appeal every year.

Although large public gatherings and fundraising events can’t take place this year, Armed Forces personnel and members of the public can still show their support by displaying a poppy and joining the Two Minute Silence on Remembrance Sunday.

The Defence Secretary has visited The Poppy Factory in Richmond to meet the team making thousands of poppies for the Poppy Appeal. The charity also provides employability support to former service personnel and makes poppy wreaths to be laid at the Cenotaph by the Royal Family.

2020 has been a challenging year but despite these hurdles, we won’t neglect our duty to remember.

Remembrance season traditionally begins with the launch of The Royal British Legion’s Poppy Appeal, scheduled this year for the 22nd October. Every year, members of the Armed Forces wear the poppy with pride and help to collect donations from the public – at railway stations, supermarkets, or in our places of work. This year we face unique challenges, but ones that we can work together to overcome and demonstrate our Remembrance with pride.

It is the same can-do spirit that you, alongside our NHS workers, carers and countless volunteers, showed time and again this year as you took part in the nation’s fight back against the virus. Overcoming huge logistical challenges, setting up Nightingales and providing hands-on medical care to those in need.

We faced the same challenge as we marked the 75th anniversaries of VE and VJ Day, but found poignant ways to pay tribute to all those who gave their lives for this country. This year’s commemorations for Remembrance Sunday and Armistice Day will indeed feel different. However, Remembrance will take place in communities large and small across the country and we have now published advice for Local Authorities so that communities can find appropriate ways to pay their respects.

And, as it does every year, The Royal British Legion’s Poppy Appeal will go ahead, the importance of fundraising to sustain a commitment to the people they support remains as vital as ever. So, maintain those links with local Legion groups and ensure you’re aware of the local guidelines. There are many ways to get involved, and The Legion’s website is packed full of information about this year’s Appeal.

With imagination and determination, you can play your part alongside The Royal British Legion in helping the UK mark this milestone that remains at the heart of our national calendar.

This November we will demonstrate our undiminished respect for those who have gone before, and our firm commitment to the continued safety of the British people.