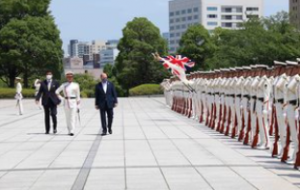 Defence Secretary, Ben Wallace MP, has visited Japan, the Republic of Korea and Vietnam on a trip to reaffirm the UK’s commitment to the Indo-Pacific.

The Indo-Pacific region is vital to our strategic interests. The UK is deepening and expanding our defence relationships with key partners in the region to tackle changing global threats.

My visit this week to the Indo-Pacific region was a fantastic opportunity to engage with our Japanese, Korean and Vietnamese partners and deepen our enduring defence relationships.

Exemplified by the deployment of the Carrier Strike Group, Global Britain continues to step forward with our partners in the Indo-Pacific to address shared security challenges and changing global threats.

The Defence Secretary has also confirmed that two Offshore Patrol Vessels – HMS Tamar and HMS Spey – will be deployed permanently to the Indo-Pacific to support maritime security in the region.

The Carrier Strike Group will shortly arrive off Singapore and operate in the Indo-Pacific region over the coming months.

This deployment is the embodiment of Global Britain in action. The strike group boosts our links with key partners and helps address global security challenges such as terrorism, regional instability, and hostile state and non-state actors. Countering these threats alongside our partners in the Indo-Pacific is vital for the UK’s own security.

As the Integrated Review announced in March, the Carrier Strike group deployment marks the start of a more persistent presence by UK Defence in the Indo-Pacific region over the coming years, re-affirming long standing defence and security partnerships and forging new ones with like-minded partners.

In Japan, the Defence Secretary met with Japanese Prime Minister Suga and Defence Minister Kishi. Our bi-lateral relationship with Japan is the closest it has been in the last century. Both the UK and Japan have a long-standing commitment to upholding regional security and promoting a unified approach to global challenges. They also agreed to accelerate discussions between the UK and Japan on developing sub-systems for a future combat air system.

Our three-year defence engagement plan with Japan will allow the UK Armed Forces to work in a much more integrated way with the Japan Self-Defense Forces. This will turn our strategic ambitions with Japan into a tangible reality.

The Defence Secretary then travelled to the Republic of Korea, where he laid a wreath at the national war memorial alongside Defence Minister Suh Wook, and visited the Joint Security Area within the Demilitarized Zone beteen the Republic of Korea and North Korea. The visit was a stark reminder of the Korean War and the need to continue to work towards peace on the Korean peninsula.

The UK and the Republic of Korea continue to collaborate on challenging regional security threats, including conducting joint exercises and military training together. The two countries also work closely around the world on peacekeeping missions and addressing global humanitarian issues, such as the UN peacekeeping mission in South Sudan.

Next month, the Republic of Korea will also host the Pacific Future Forum. Held onboard HMS Queen Elizabeth while alongside in the Republic of Korea, the three day event is an opportunity for policy makers and industry leaders to discuss issues around defence, security, technology and to promote free trade.

Finally, the Defence Secretary visited Vietnam where he laid a wreath at the Hanoi War Memorial and paid respects at the Ho Chi Minh Mausoleum. He then met with Minister of National Defence, Snr Lt Gen Phan Van Giang, President of State Nguyễn Xuân Phúc and Prime Minister Pham Minh Chinh to discuss expanding the defence engagement between our two countries.

He also had the opportunity to meet with the Vietnamese UN peacekeepers to whom UK personnel on Op TRENTON handed over to in South Sudan in 2019, following their construction of a Level 2 hospital.