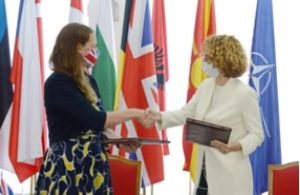 The UK has set up a permanent military team in North Macedonia, marking a new level of defence cooperation with partners in the Western Balkans.

The cell will involve a small military team coordinating and channelling UK training into the region. This will focus UK capacity-building efforts and enhance cooperation between UK and partner forces in the region. It will also improve the coordination of partnered military training and enable the UK to better understand and support the training requirements of our defence partners.

The cell will be based in North Macedonia, NATO’s newest ally which joined in March 2020, and will support them and other regional NATO partners in meeting capability targets associated with NATO membership.

The agreement signed today underlines the UK’s commitment to enhancing cooperation with our partners in the Western Balkans and takes our defence relationship with our friends there to a new level.

We look forward to working closer than ever to ensure security in this important region.

One function of the newly established permanent cell will be to coordinate UK support to North Macedonia in the delivery of a light Infantry Battalion at readiness for NATO operations next year.

The recently published Defence Command Paper outlined that in an age of global and systemic competition, our Armed Forces will be persistently globally engaged with partners around the world. The paper also stated the UK’s commitment to working closely with partners in the Western Balkans to maintain and promote regional and international peace and security, demonstrated by a recent visit to Montenegro by Minister of State for Defence Baroness Goldie. The Western Balkans Land Regional Coordination Cell will support UK Defence in realising this ambition.