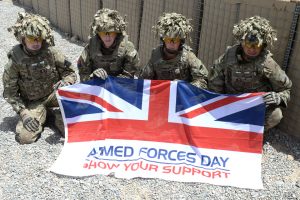 Soldiers from The Royal Highland Fusiliers, 2nd Battalion The Royal Regiment of Scotland (2 SCOTS) based at Camp Bastion in Afghanistan, showing their support for Armed Forces Day in 2013.

US President Biden has announced that US troop withdrawal from Afghanistan on May 1 after two decades of presence in the country.

Joe Biden declared the decision as “time to end America’s longest war.” President Biden added, “I am now the fourth American president to preside over an American troop presence in Afghanistan. Two Republicans. Two Democrats. I will not pass this responsibility to a fifth.”

“The people of Afghanistan deserve a peaceful and stable future.

As we drawdown, the security of our people currently serving in Afghanistan remains our priority and we have been clear that attacks on Allied troops will be met with a forceful response.

The British public and our Armed Forces community, both serving and veterans, will have lasting memories of our time in Afghanistan. Most importantly we must remember those who paid the ultimate sacrifice, who will never be forgotten.”

NATO who have approximately 10,000 troops in Afghanistan will also commence withdrawal on May 1 in line with the US.

One UK Defence Official was quoted in a Financial Times report as stating, “it’s just not realistic for us (the UK) to stay if the US leaves. If they go, so do we.”

There are around 750 British forces personnel still in country.