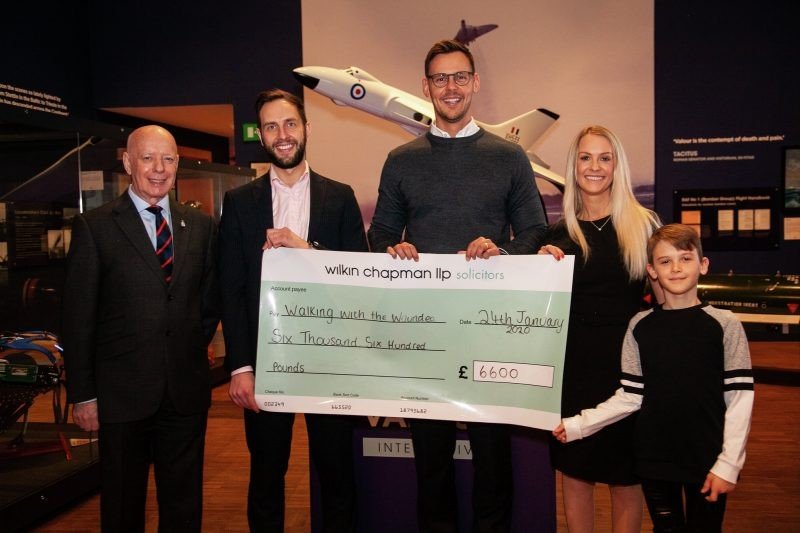 As part of Wilkin Chapman solicitors’ commitment to supporting Armed Forces personnel, its offices in Grimsby, Lincoln and Beverley, supported by those in the Wolds and the Doncaster Business Solution team, organised the festive stride-outs in December as part of the national Walking Home For Christmas campaign. The campaign itself was launched across the UK by the charity Walking With The Wounded.

The total fund-raising for the walks was £5,600 – surpassing an initial target of £4,725 and therefore enough to support eight veterans through bespoke mental wellbeing rehabilitation programmes. In additional to that total, Wilkin Chapman raised £1,000 from events during the 2019, Armed Forces Day, which was presented to Walking With The Wounded at the same time, making a total of £6,600.

Wilkin Chapman Partner and Military sector lead, James Marsden was delighted to present the money to the charity’s corporate sponsorship and development manager Joel Oxberry. The presentation took place at The Collection Museum in Lincoln where The Century of Valour exhibition is being held. Featuring in the displays at the exhibition, of which Wilkin Chapman is a sponsor, is the famous Victoria Cross of Wing Commander Guy Gibson.

Joel said: “Being a charity, we depend greatly on the generosity of organisations like Wilkin Chapman. In truth, it’s only due to committed companies, and the individuals that make up their workforces, that we are able to support veterans in need with mental health and employment support. We’re proud to partner with Wilkin Chapman and are thankful for their consistent support over the past year.

“Importantly, we look forward to working with the team once again as we celebrate 10 years since establishing Walking With The Wounded and its services to support military veterans who have fallen on hard times post service.”