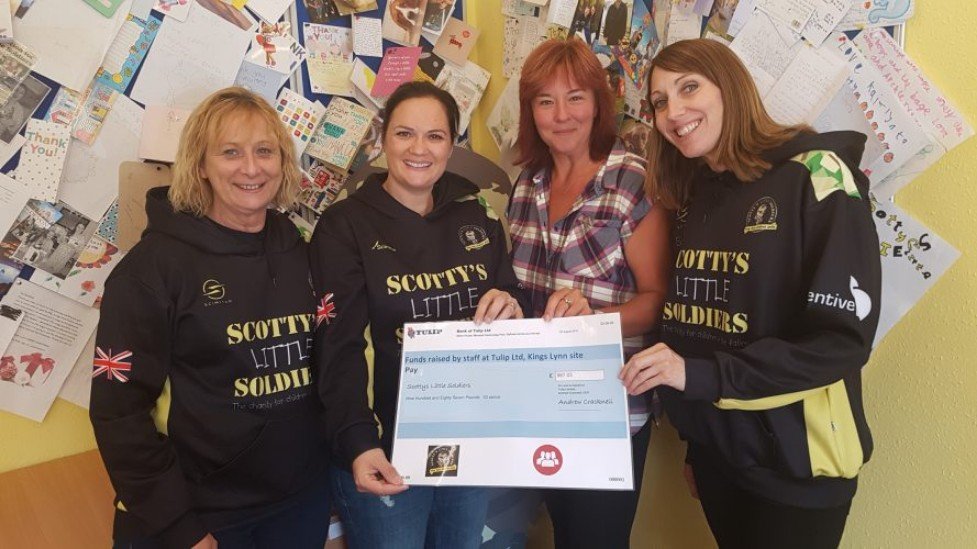 The King’s Lynn branch of one of Britain’s largest food production companies has selected Scotty’s Little Soldiers as its local charity for 2019 and 2020, providing continuous fundraising support over a two-year period…

Staff at Tulip Ltd’s King’s Lynn office have undertaken a range of activity thus far in order to support children who have lost a parent in the British Armed Forces – this includes: a raffle, weekly Bonus Ball competition and regular bake sales, with the proceeds all going to Scotty’s Little Soldiers.

Tulip Ltd’s King’s Lynn location means Scotty’s Little Soldiers is a charity which many staff have been aware of and supported for some time. A number of staff members are ex-forces which also means the message of the charity particularly resonates.

Discussing the business’ ongoing fundraising support, Jane McNaughton, HR Assistant, commented: “We’re enormously proud to have chosen Scotty’s Little Soldiers as our local charity and have made a solid start to fundraising. Staff know just how much this money means to a charity like Scotty’s so will go that extra mile when it comes to activity.

“Being based locally to us , we are aware of the great work Scotty’s Little Soldiers does for bereaved Armed Forces children across the UK and we know the need to continuously raise funds in order for them to continue their support.”

Charity founder, Nikki Scott said: “On behalf of everyone at Scotty’s Little Soldiers, we want to say a massive thank you to the Tulip Ltd team for their support of our charity. It’s amazing when we hear a business is supporting our cause because it often means staff have shared our message and promoted the charity. We’re always grateful when we see the effort people put in to raising money for our charity.”