The Day The World (And My World) Changed Forever 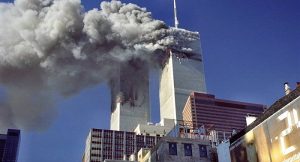 Pathfinder International editor, Mal Robinson, looks back on 9/11 on the 18th anniversary of the attacks on US soil and what the fall out since meant for him.

For me, it was a usual day working as a Chef in a pub restaurant, a mundane day at that, another 12-hour shift, grafting and sweating away. It was a job which had gotten out of hand if you like. It was only supposed to be a part-time affair, whilst I studied at University.

You could say that day’s events helped serve as a wakeup call, the first of many, to get my career kick started once more.

Service had not been going long, when the manager came down from his flat to notify the skeleton kitchen staff of an incident at the World Trade Center and that the US were under attack in what looks like World War III.