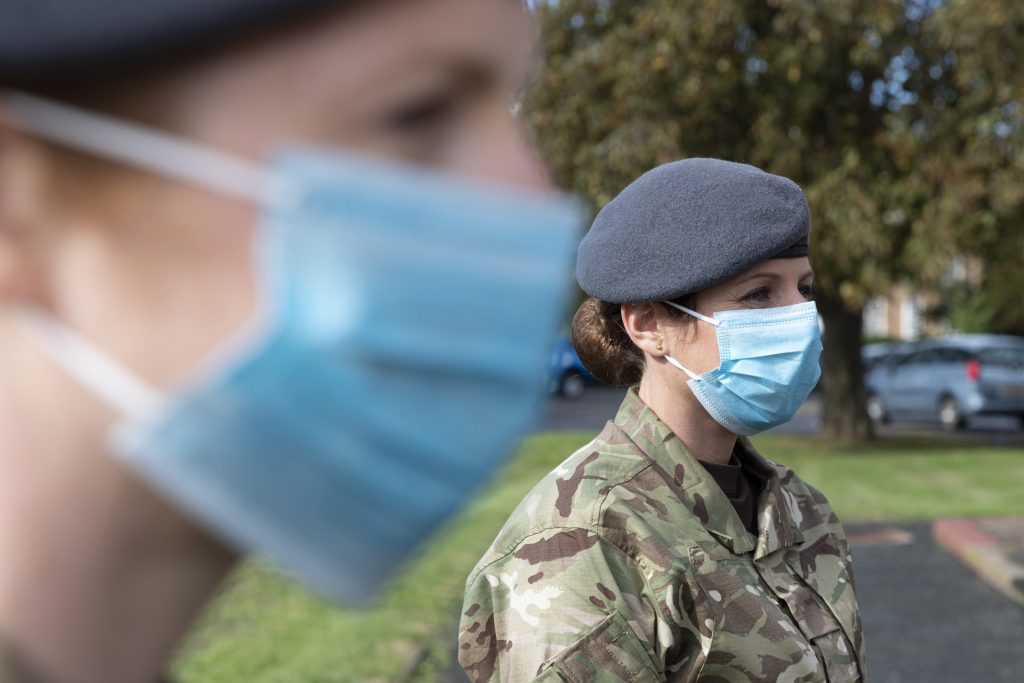 Royal Air Force personnel from the RAF Music services and 51 Squadron RAF Regiment have been training in preparation for the Drop and Collect self-test initiative to private properties in Birmingham.

The Ministry of Defence is supporting a request from Birmingham City Council to provide personnel to support the ‘Drop and Collect’ Covid Test Distribution.

Since the start of the pandemic, the Armed Forces have worked with colleagues across Government to increase the national testing capacity.

Under the Military Aid to Civilian Authorities system, approximately 100 military personnel will now be working with Birmingham City Council to support its Drop and Collect Testing initiative.

The Armed Forces are uniquely placed to help with the fight against Coronavirus and remain ready to provide support as and when the situation demands it.

“Since the start of the pandemic, the Armed Forces have worked with colleagues across Government to increase the national testing capacity.

“In response to a request from Birmingham City Council, the MOD will supply military personnel to support its COVID-19 Drop and Collect Testing initiative.

“We are well placed to help with the fight against Coronavirus and remain ready to provide support as and when the situation demands it.”

Birmingham City Council sought military assistance after it launched a new drop and collect service to provide citizens an easier opportunity to get tested for coronavirus.

“I’d like to thank everyone involved in the drop and collect testing service: council staff, volunteers from across our partner agencies and the military personnel who are now supporting this effort. It is vital we drive down our infection rates and increased testing is an essential part of this. We can only do this by working together. I know it is hard, but if everyone sticks to the rules, maintains social distancing, wear a face mask whilst in public indoor settings and washing hands regularly we will get through this.”

Staff from across the council, NHS and wider public sector have volunteered to take part in this effort to increase access to testing in our city. The teams will be visiting households in different areas of the city to offer the test kits on the doorstep, even for those without symptoms, to support more testing. Testing is completely free and once dropped off, a volunteer will come back and pick up the completed kit within the next hour.

The test involves taking a swab of the inside of your nose and the back of your throat, using a long cotton bud. You can do the swab yourself; and can also do it for children or other people in the house who are unable to do it themselves.

RAF Personnel from 51 Squadron RAF Regiment and elements of the RAF Music Services will be deployed to support Op RESCRIPT under command of Number 5 Force Protection Wing.

The RAF, along with the other Services, is ready to support the nation, whenever called upon.