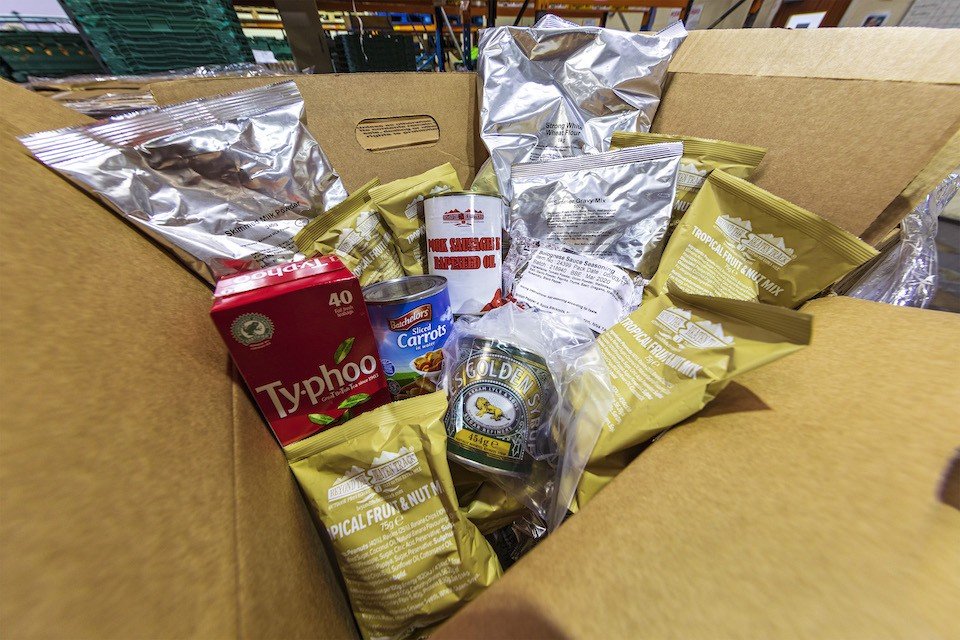 The Ministry of Defence has donated thousands of unused ration packs – the equivalent of over 14,000 nutritious meals – to FareShare, a charity that distributes food to over 11,000 UK charities, including community groups, homeless hostels and lunch groups for older people…

The donation is part of the MOD’s commitment to reducing waste in an environmentally sustainable way when ration packs are unused. The meals distributed by FareShare will be given out as part of street outreach for the homeless and to provide relief for those in temporary B&B accommodation where there are limited cooking facilities.

The 14,000 Operational Ration Packs were delivered to the FareShare headquarters in Deptford just before Christmas, where they were sorted and delivered to charities in need of food donations over the festive period.

Minister for Defence People and Veterans Johnny Mercer said: “FareShare does an excellent job of getting proper nutrition to those who need it most, distributing food to thousands of charities around the country. I am proud that our ration pack donation supports their goals whilst reducing unnecessary food waste.”

The MOD has partnered with FareShare for nearly one year because of the work they do to redistribute surplus food to charities that turn it into quality meals, often for vulnerable people. FareShare’s work also saves charities an average of £7,900 yearly that they can reinvest back into their vital services.

FareShare CEO Lindsay Boswell said: “The ration packs we received were sent to charities across London. Because these packs don’t need refrigeration they are ideal for winter night shelters where volunteers need to make food quickly, or to offer out to families in temporary accommodation who might only have access to a kettle or a hob.”

Operational Ration Packs offer a high-quality flexible range of food to meet the needs of servicemen and women. The donated packs are used for group meals, usually by military chefs in field kitchens, and include enough to feed ten soldiers for a 24-hour period. The packs include ingredients that enable the preparation of nutritionally balanced meals for breakfast, lunch and dinner, and provide an average of 4000 calories.

DE&S Director Logistic delivery Roger West said: “A little under a year ago we announced that we would support the important work of FareShare by providing unused surplus rations that MOD would be unable to consume, and would otherwise become waste. I am very glad that we are able to provide this support to those most in need.”

Around 2 million ration packs are used by the military every year, with less than 1% of the MOD’s stock requiring disposal. This scheme means that there is an opportunity to gift to those in need and ensure that any good food does not go to waste.