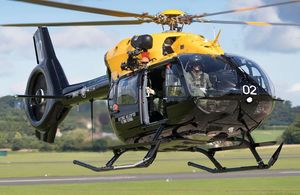 A cutting-edge Air Traffic Management System is operational at RAF Shawbury in a £1.5 billion contract transforming air traffic management for the UK military.

Designed to ensure safe and resilient military flying operations, the contract will integrate and support modern, innovative equipment with existing infrastructure. Variations will be rolled out across more than 60 Ministry of Defence sites in the UK and overseas by 2024, including Cyprus, Gibraltar and the Falkland Islands.

The equipment allows controllers improved situational awareness enhancing flight safety, with digital upgrades including touch screen communications, clearer radar pictures and improved flight information and positioning – all of which will be available on upgraded controller consoles.

Around 300 jobs have been secured in Fareham and other areas of the UK since the contract was awarded to Aquila Air Traffic Management Services Ltd in 2014 – a joint venture between Thales and NATS (formerly known as National Air Traffic Services).

Ensuring our drones, fighter jets, helicopters and cargo aircraft operate safely and efficiently is critical to maintaining our capabilities and supporting our service personnel. This state-of-the-art system is another example of how we are putting innovation at the forefront of everything we do.

The £1.5 billion programme, known as Marshall, provides improved reliability, quality of service and cost savings by using Aquila Engineering teams to maintain the equipment. The programme is expected to save the UK taxpayer up to £317 million across the next 22 years.

The air traffic system includes a £400 million investment in advanced surveillance radars and a wide range of sophisticated equipment such as tower systems, new surveillance and navigation aids and radios.

Sir Simon Bollom, CEO of DE&S, the procurement arm of the MOD, said:

This is a key milestone in a programme that is vital to front-line capability. It is an excellent example of collaboration between DE&S, the RAF and industry to provide the Armed Forces with the technology to do their job safely and effectively.

As the first unit to transition to full operational service, the last year has naturally been both a challenging and exciting period of change. I am immensely proud of my team in turning this advanced equipment into an operational capability.

Working in ever-closer partnership with Aquila, controllers and duty holders now have a much deeper understanding of the air traffic management surveillance solution than ever before.

The full Marshall ATM Solution entering operational service at RAF Shawbury marks the achievement of a major milestone in the Marshall programme. This new technology will transform air traffic management for our military in the UK and overseas and enable our customer to realise significant operational and cost saving benefits.