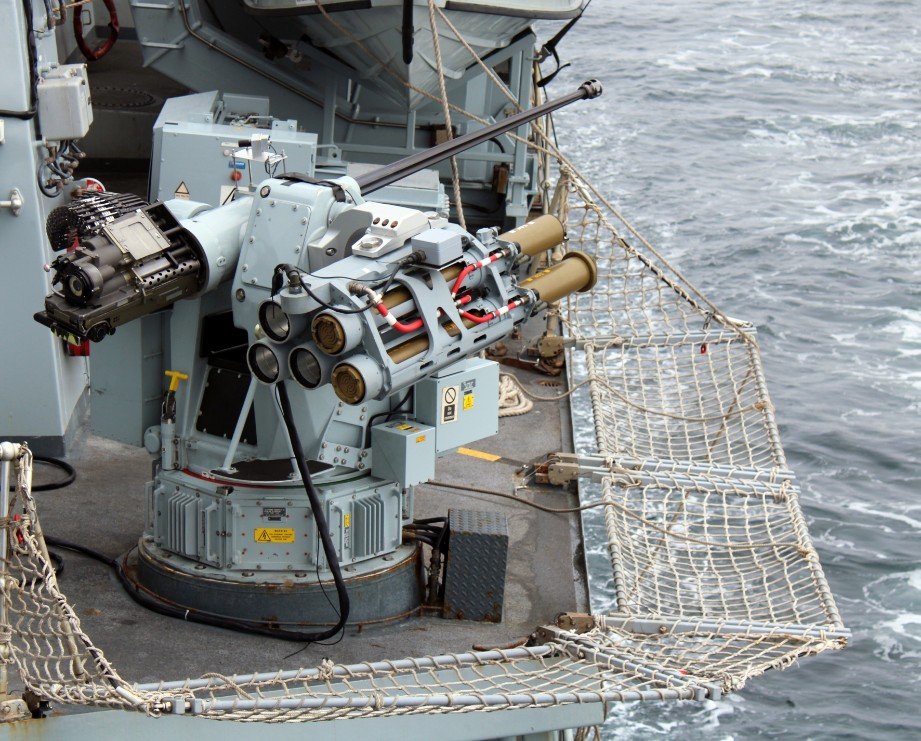 HMS Sutherland fired four new Martlet missiles at a fast-moving speedboat off the Welsh coast to see whether the weapon could be launched from a ship as well as a helicopter. Martlet – also known as the Lightweight Multi-role Missile – was originally designed to be fired by Wildcat helicopters to take out small boats which posed a threat to the Fleet, alongside the heavier Sea Venom for dealing with larger warships.

But recent incidents where both merchant and military shipping have been attacked by manned and unmanned surface and air systems armed with explosive devices, underlined the risks faced by Royal Navy units deployed in danger zones.

All ships are armed with a series of machine-guns and Mini-guns (manually-operated Gatling guns) to fend off small craft, while some are also equipped with Phalanx automated guns which spew out a hail of bullets at incoming aircraft, missiles and threats on the surface.

The Royal Navy wanted to add to those defences and turned to the new missile system, modifying it so a launcher could be fitted to the existing 30mm automatic gun. Just five months after the idea was mooted, the Plymouth-based frigate was off the Aberporth Range at the southern end of Cardigan Bay facing a fast inshore attack craft tearing across the water.

After first proving that the gun could still fire accurately with the missile fitted – 120 rounds obliterated a large red ‘killer tomato’ target – and that the sensors behind Martlet could track its radio-controlled foe at ranges of up to five kilometres.

Finally, four missiles were fired – one to test the effect of the Martlet ‘blasting off’ from its launcher on the gun mounting and the side of Sutherland (the missile accelerates to one and a half times the speed of sound in an instant), three packed with telemetry to measure the missile’s accuracy (ordinarily the weapon carries a 3kg warhead).

All was recorded by high resolution cameras so the team from manufacturers Thales and military scientists could analyse the effects in minute detail.

“The current defence against fast inshore attack craft, the 30mm gun, is highly effective for closer range engagements,” said Lieutenant Commander George Blakeman, HMS Sutherland’s Weapon Engineer Officer.
“By adding the missile to the gun mount it is anticipated it will extend the reach of the ship’s defensive systems – key to successful defence against fast craft using swarm attack tactics.”

The frigate’s Commanding Officer Commander Tom Weaver added: “The impressive result of this trial was achieved through the hard work and cooperation of a wide array of industry and defence partners and it was rewarding for Sutherland to have played such a key role in its success.”